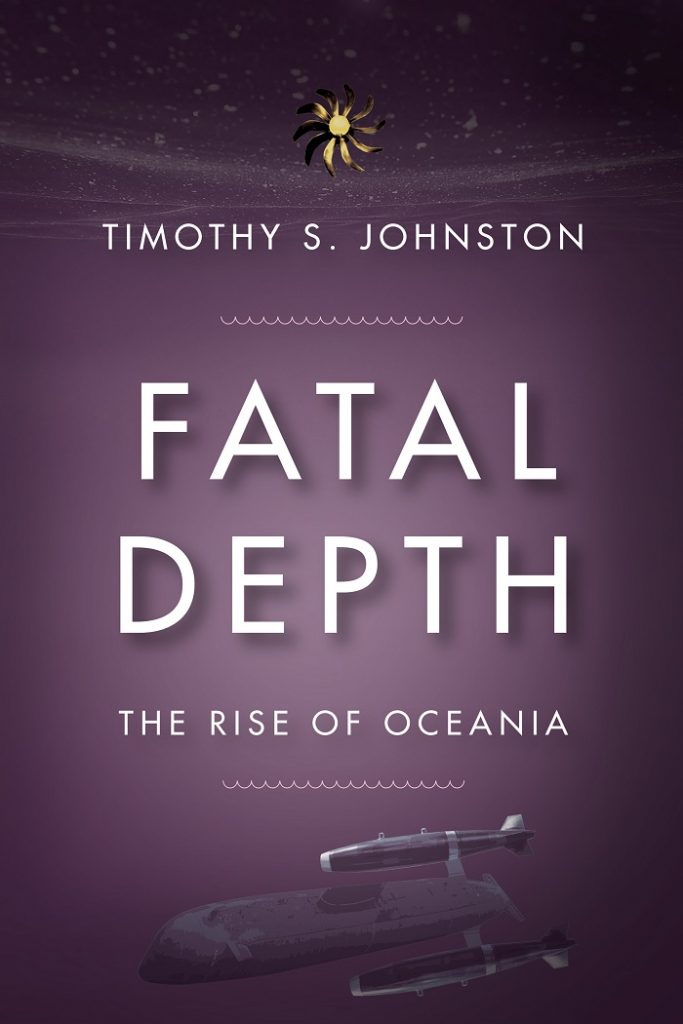 AMAZING STORIES: “… the pace remains breathless, leaving the reader in a state of eager anticipation as one turns the pages. This is accomplished by a strong element of mystery which makes the reader yearn for more information and revelation. Johnston deploys this technique as a partial substitute for action, and it is every bit as effective at compelling the reader forward.

There’s always something different, something unexpected, dare I say original, in Johnston’s description. Never the same old, same old. His battle sequences are exciting, like many a technothriller or piece of military fiction, but full of quirky and offbeat details the reader has never seen before. This is quite refreshing.

This is a quest mission novel to a degree, and involves the best possible partners in the quest, namely reluctant partners who hate each others guts. This keeps things interesting. Rest assured nothing is ever what it seems. Great fun.

What I’m trying to say in my usual convoluted and verbose manner is that author Timothy S. Johnston has the knack of getting the genre formula absolutely right in terms of balance. No one aspect hinders the others in any way. Plot, action, characterization, tech info, and originality are combined seamlessly into a tale that flows as rapidly as a river in flood. Some books are impossible to finish reading. This book is impossible to put down. It’s so much fun and exhilarating you want to stay up late till you’ve finished it.

In particular, the Rise of Oceania series by Timothy S. Johnston is sparklingly addictive, stimulating, entertaining, and truly “the pause that refreshes.” In other words, a pleasant and exciting way to ignore your mundane real world problems. Escapist literature? You bet! In the best possible way. Action adventure techno-thriller done exactly right. Perfection, I’d say. Doesn’t get better than this.

Which is my subtle way of saying “Highly recommended.” Don’t miss out. Read the series. You’ll have fun.” — Amazing Stories

MIDWEST BOOK REVIEW:  “Fatal Depth: The Rise of Oceania is nautical thriller cli-fi reading at its best, and joins two others in navigating a flooded, collapsed world in the 2100s in which political clashes take place at sea.

In 2128, over ten million now populate the ocean floor in twenty-nine cities. The struggle for independence against the United States and tensions with China foster an environment of war and conflict fostered by new technology and alliances that crumble …

Military sci-fi readers who enjoy tense action from the start, strong characters who react to and analyze their environments, and portraits of determined captains on all sides of the rising crisis will appreciate Timothy S. Johnston’s attention to nonstop action and detail …

Exquisite in its combination of futuristic vision, military maneuvering on all sides, conundrums facing survivors who keep encountering new situations, and political struggles that affect all communities above and below the tides of change, Fatal Depth: The Rise of Oceania is both a powerful addition to the series and a fine stand-alone read accessible to newcomers who may not have prior experience with this setting. Maps, a timeline, and succinct description paint all the background necessary to thoroughly enjoy this thriller, which should be on the shelves of any library strong in nautical cli-fi or science fiction powered by political and military clashes.” — Midwest Book Review, D. Donovan, Senior Reviewer

SFCROWSNEST: “Mac’s mission: To sink the unsinkable, a massive submarine unlike anything they’ve ever encountered before … With the city of Trieste once more in danger, it’s a ‘do or die’ mission …

Timothy S. Johnston is also a man on a mission. With every new novel, in this series and ‘The Tanner Sequence’, he seeks out not only a new story to tell and the right way to tell it, but new technology to examine, explain and exploit. For me, one of the delights of picking up one of Johnston’s novels is the tech. He has a knack for creating not only what feels possible but explaining it in a way that makes sense and then further using that technology in a way that rivets the reader. The deeper into one of these novels you get, the faster you will turn the pages.

The excitement factor in ‘Fatal Depth’ is no joke. You could almost compare it to a tsunami plow. The threads in the story culminate in an almighty push that will carry you all the way to the end in a dizzying rush. I read the second half of the book in one sitting …

I especially appreciate the way Johnston writes women. They’re as tough and strong as his male characters but also read as female. They’re allowed to be scared and unsure and emotional, as are the men. They’re allowed to be women. It’s a fine distinction and not always easy to carry off. But it’s part of why all the characters in this series matter and why I look forward to catching up with them in each new novel.

Then we have Truman McClusky, the hero who never stops. I especially appreciate the time taken to get inside Mac’s head now and again so the reader remains fully in touch with the awesome cost of what one man will sacrifice to achieve what must at times feel like an impossible dream.

I almost don’t want to see what he’ll have to give up next and, in fact, hope he might gain something instead. Thankfully, the wait won’t be long. We can expect to see ‘An Island Of Light,’ the fourth novel in the series, later this year.” — SFcrowsnest

AUTHOR MICHAEL LIBLING:  “Sink the unsinkable! Anyone who knows the story of the threat posed by the Bismarck — Germany’s super battleship of WWII — will find even more to appreciate in Johnston’s latest entry in his Rise of Oceania series. It’s an SF techno-thriller that opens with a tidal wave of action (literally!) and never lets up. Indeed, Fatal Depth is an unpretentious, hugely entertaining read set in a vividly realized and all-too-plausible future world. Mix one part Tom Clancy with one part Ian Fleming and the result might well be Timothy S. Johnston — an author with a command of science and technology, and the rare skills to bring it all to life on the page.” — Michael Libling, author of Hollywood North: A Novel in Six Reels

READERS’ FAVORITE: “… heart-stopping action! Timothy S. Johnston is an incredible writer, word perfect, and so imaginatively creative one has to read his books to truly experience the cinematic aspects of his beloved underwater world. He builds tension with every chapter as his plot twists and turns throughout, and even the last page jolts us with an unexpected shock. Yet, somehow in the midst of all the dangerous excitement, his readers find themselves caught up in the emotional pasts and presents of his characters, but never at the loss of momentum or suspense. There’s a reason Johnston was the winner of the 2018 Global Thriller Award. Discover that reason for yourself when you read his entire Rise of Oceania series of books.” — 5 Stars at Readers’ Favorite

When a colossal submarine, larger and more powerful than anything built before, attacks and destroys the United States Submarine Fleet Headquarters, it poses a threat to other nations, both land- and ocean-based. In addition to its massive size, the sub is bristling with weaponry, including some new and heretofore unknown flourishes …

… The book then takes us through a suspenseful campaign to see if Truman’s plans will come to fruition, and whether the alliance he has cobbled together will hold.

Beyond the intrigue, Johnston offers us a compelling and convincing image of what life in the undersea cities might be like …

AUTHOR J.J. MARTIN:  “Johnston’s evocative style is here, used well for the high science detail of this underwater thriller. Is it okay to learn something while you’re having this much fun? I feel like I know how to pilot a 22nd century submarine fighter, or at least I know some physics behind the very cool supercavitating drive …

The story torpedoes forward with blood-wet battles, swaggering navy dudes and plenty of technical complexity. Imagine being in a deep water air-bubble moving at 400 km/hr – you’ll get enough detail to see it in your mind’s eye clearly. Underlying it is a satisfying story with ticking clocks, desperate politics and enough water pressure to compress a human body into a lacrosse ball.

TSJ brings you along into the kinds of tense scenarios he’s written about in the previous two books of the Oceania series, but this story has strong momentum because of its simple focus – stop the Dreadnought. This is the second trilogy TSJ has completed now, and it fits nicely with his first – different enough for novelty, but similar enough that you can imagine it being in the same universe. Would love to see the whole series on Netflix as binge-worthy TV. It’s certainly binge-worthy reading.” — J.J. Martin, Author of Father Sweet

AUTHOR J.J. DUPUIS:  With Fatal Depth, Timothy S. Johnston takes readers to a future so fully-realized and nuanced that it feels like he must own a crystal ball. The undersea world of the novel, its science and politics, at once harkens back to the golden age of sci-fi, while seeming so prescient that it’s like a glimpse into tomorrow. Johnston handles the action as masterfully as he does the world-building. Fatal Depth is a whirlpool of a novel that sucks the reader right in and doesn’t let go. — J.J. Dupuis, Author of the Creature X Mysteries

FATAL DEPTH from Timothy S. Johnston and Fitzhenry & Whiteside is available to purchase at these links.