A Q&A On The Freezer with Timothy S. Johnston

Q.  Tell me about the setting of THE FREEZER.

A. It’s the opposite extreme for Tanner this time.  He ends up on Jupiter’s ice moon Europa.  It’s the most interesting place in the solar system, really.  There’s no land,it’s completely covered in water ice with a layer of liquid water underneath. The surface is cracked and broken and fissures can open at any moment and swallow you.  Tanner’s investigation takes him to a facility there.

Q.   THE FURNACE took place very close to the sun.

A.   I did that because it represented the heat of the investigation, and Tanner’s mission was more or less a descent into hell.  I also did it because when people are hot and uncomfortable, or unsettled by the environmental conditions, their true emotions boil to the surface.  Our innermost selves emerge.  I thought it would be interesting.  It’s why Spike Lee set DO THE RIGHT THING during a heat wave in Brooklyn, so feelings that we usually keep hidden surge out.  That movie was about racial problems, however.  In THE FURNACE, it was about trying to identify the killer, and the heat and danger of the setting contributed to the tensions.

Q.  But with THE FREEZER…

A.  Yes, something happens to Tanner that affects him deeply.  I took him to the edge of an emotional precipice, and I wanted the environment to once again reflect his emotions.  So the freezing cold temperatures mirror this.  Also, by having it so cold outside, as well as inside the facility, people are uncomfortable and on edge already. There’s also the issue of claustrophobia, which I want to keep high in this series.

A.   Keep in mind that Agatha Christie was a big influence on me.  Her ‘whodunnit’ scenarios.  It’s a cardinal rule in this type of book.  I’m essentially transforming classic murder mysteries into technothrillers, and keeping them grounded and relevant for mainstream readers.  The setting has to be hostile.  If you go outside for too long, you die.

A.   Yes. With THE FURNACE the danger was the radiation and heat of the sun.  With THE FREEZER it’s the cold and hostile nature of the ice beneath their feet.  And the cold means you can’t stay out for long.

Q.   So THE FREEZER features another locked-room mystery?

A.   It’s an isolated, dangerous location. Claustrophobic.  One investigator and a killer, and a cast of other characters. No one comes or goes.  So yes, it is.

Q.  Is it necessary to read THE FURNACE first?  Are these books related?

A.   Obviously Tanner is changing and growing from one book to another.  This series is an emotional and brutal journey for the man.  However, the mysteries are not related, so the reader can still read them in any order.

A.   That’s the third in the series.  Tanner will be on another mission, in another location.  That mystery is not related to the first two.

Q.   What about this journey you’re referring to?  What’s going to happen to him?

A.   Tanner is very loyal to the rulers of the Confederacy in the first one.  He understands that civilians dislike the military dictatorship they’re in, and that he’s a tool of that dictatorship, and yet he knows that he has a responsibility to catch killers and prevent murder.  But as his journey continues, yes, he’s going to realize what’s going on around him, and it’ll change him.

Q. Is he still alone like he was in THE FURNACE?

A. Yes and no.  You’ll see.  There is someone extremely close to him, and she unknowingly does something that helps him in the end.  It’s unexpected I think.

Q.   What about your journey?  Tell me a little about it.

A.   I’ve been working on my writing for over twenty-five years.  I finished my first book to my satisfaction in 2006.  By the time I landed the book deal with Carina for The Tanner Sequence, I had six books finished.  Now I have seven and am working on the eighth.  It’s been a struggle, but a necessary one.  It forces you to work hard.  To make everything as flawless as possible.

Q.   And your philosophy to writing?  What are you trying to do?

A.   I’m trying to bring more Science Fiction to the mainstream.  I’m writing technothrillers, basically, and setting them in futuristic environments.

A.   A thriller with a scientific plot line.  But I like the futuristic settings because it gives me room to play.  Lots of fun things to do and interesting places to take my characters.  Dangerous places.  But I’m careful not to alienate my readers. No bizarre situations, no aliens or alien civilizations.  Everything is grounded in reality and the technology is believable.  I hope, in the end, that what I’ve done is write a page turner in an interesting environment.  A horror/mystery/science fiction thriller.

Q.   Why set these stories in the military?  Tanner is a Lieutenant I think.

A.   Yes, he serves a dictatorship, which conflicts him.  It makes his situation compelling.  I like mysteries set in the military.  The reason is that rank is all-important, and the chain of command incontrovertible.  But throw a murder in the mix, and an investigator who may be a lower rank than the commanding officers, and all of a sudden there’s huge potential for drama.  I love it, and the tension this creates is palpable.

Q. What about the lower ranks?

A. Writing characters who are insubordinate is fascinating.  Why are they contravening regulations?  Why not follow established protocols and the chain of command?  Is it because they’re trying to hide something?  Or are other issues driving them?  The military is an amazing source of drama for someone like me.

Q.   What are your feelings about the response to THE FURNACE?

A.   I couldn’t be happier about it.  It seemed as though reviewers understood where I was going with it.  It was a science-based plot cloaked as a classic murder mystery, and I read words like “gripping” and “riveting” in their reviews.  As an author of thrillers, there’s nothing more satisfying, let me tell you.  I want to create stories and settings that have people dying to flip the pages.  Maybe I succeeded.  Maybe I didn’t.  Who knows.

Q.   What did you learn from THE FURNACE?

A.   Don’t overwhelm the reader with too much science.  Keep it tight and fast-paced.  Make the story compelling.  Invest a lot of time in research and plotting and it’ll pay off.  Make it relevant and relatable.  Put it in a dangerous environment.  Tension is your friend.  There are probably a hundred other things too.

Q.   Why did you write these books in first person?

A.   That’s probably one of them!  I love writing in first person.  Look, it’s an intense experience for Tanner, the protagonist.  He doesn’t know who’s the killer or if he’s going to die in the next minute.  So if I write the novel in first person, it becomes experiential for the reader.  They become Kyle Tanner, the person at the sharp end of the sword, and it’s a visceral experience.  At least I hope so.  Figure out the mystery or die.  That’s what it’s about, and that’s why first person is so important, to me at least.

Q.   THE FREEZER is first person narrative as well?

Q.   And does it have another science-based mystery?

A.   Very much so, though I admit there is more action and excitement in this one. It still has the same horror and mystery and investigation, but the setting allowed for some thrills and chills, pun intended.  But the method of murder is a scientific mystery, and the reason why as well.

Q.   I understand you spoke with a forensic pathologist for research, and also went to an anatomy lab.  Why?

A.   That was for THE VOID, my next book.  I’ve finished it and submitted it to Carina, my publisher.  Parts are graphic, and I wanted to get it right.  I visited the morgue as well.  It was quite an experience, and I think it paid off.

Q.   Thanks for talking with me.

*** For further reading, an interview with TSJ at The Qwillery about writing The Freezer.

The Freezer from Timothy S. Johnston and Carina Press is available wherever eBooks are sold. 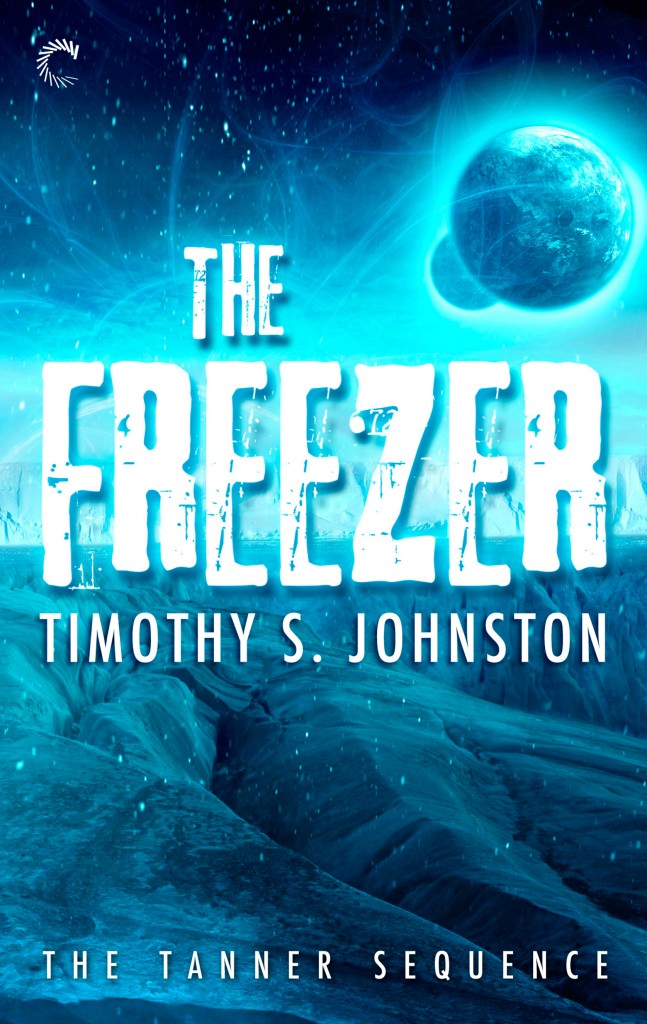