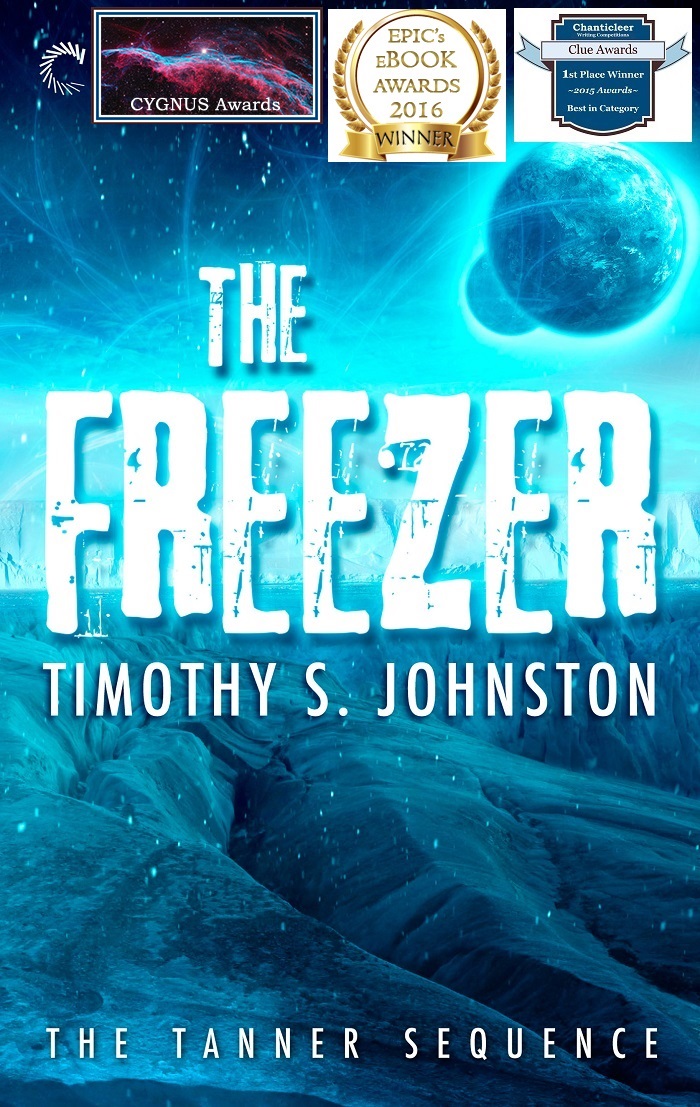 SCIENCE FICTION REVIEW:  “Johnston understands how to truly craft a story, making each one a compelling and tense read. Fans of Michael Crichton or James Patterson will certainly love Timothy S. Johnston.” — Science-Fiction-Review

RT BOOK REVIEWS:  “This sequel to The Furnace is a combination of science fiction, thriller and horror that has the hero asking questions about the confederacy of which he’s a part.  Too bad he won’t like the answers!  The exciting tale will keep readers rapt, desperate to find out what happens next.” — 4 stars from RT Book Reviews

SFCROWSNEST:  “Like the first novel in The Tanner Sequence, ‘The Freezer’ is a mystery that gathers more kinks as it unravels. Bodies start piling up with the clues and the harsh environment becomes an additional foe, especially when the facility is compromised. The final resolution is another Hail Mary that might have the reader believing Tanner has his own guardian angel or you could just decide that he’s very, very good at his job. Perhaps a little too good!  I really enjoyed this thrill ride. The mystery kept me guessing, the science was interesting and, as before, the Science Fiction elements felt authentic. Johnston has built a very vivid and compelling world, one that can carry as many mysteries as Tanner can withstand. ‘The Freezer’ is book two in the Tanner Sequence. Book three, ‘The Void’, is due out early 2015.” — SFcrowsnest

eBOOKANOID:  “Timothy S. Johnston pulls out all the stops possible and gives us an extremely exciting, and claustrophobic closed room murder thriller. He is rapidly becoming the leader in the Sci-Fi form of this genre as his previous book (The Furnace) dealt with much the same sort of situation, only this time it is on Jupiter’s freezing (both literally and metaphorically) moon Europa, where all is not as it seems … This is a story with a multitude of layers, offering much more than the simple excitement of a space thriller – though it does that in spades as well!  It has as much action as anyone could wish for in a thriller, but also it explores the implications of military dictatorship and totalitarian power, and how people should react to the massive misuse of power by government (relevant in our age, sadly) … it is a thoughtful contemplation of the use and misuse of power as well as being a thoroughly enjoyable and exciting thriller and sci-fi read … Excitement galore, complex and believable characters, a ferocious and lethal setting and surprises on almost every page … Great fun to read, but thought provoking as well.” — eBookAnoid

SCIENCE FICTION REVIEW:  “Timothy S. Johnston has done it again with his newest Kyle Tanner book,  The Freezer.  Once again, the reader is taken on a wild ride … In The Furnace, we are introduced to Tanner as a gruff, duty-bound detective with a talent of following his gut to a successful arrest.  In  The Freezer, Tanner’s character becomes more complex and richer … making Tanner more interesting … probably a foretelling of things to come in the next book in Tanner’s series,  The Void.  As before, Johnston has done a lot of research in writing his book.  The science is generally accurate and in line with current knowledge.  It is not thrown at the reader in an info dump, but rather fed in drips and drabs as the storyline progresses, quite often almost as in an afterthought.  On several occasion, I was off to the internet as the science presented got me interested in a deeper understanding of it.  The Freezer is a little bit of Asimov’s Caves of Steel , a little bit of Shelley’s Frankenstein, and a bit more of Carpenter’s The Thing, , but it is totally unique in its own right.  It is direct and to the point with enough action to please everyone.  What might have impressed me most was that Johnston somehow managed to create a sense of foreboding claustrophobia in the wide open reaches of Europa’s ice field.  This is a great ride, and I heartily recommend it.” — Science Fiction Review

CHANTICLEER BOOK REVIEWS:  “There are mysteries to solve and ticking time bombs to defuse in Timothy Johnston’s second book in The Tanner Sequence. Readers, grab onto your seats for richly crafted, multi-genre novel in a world set 400 years into the future … The Freezer is well written, and the characters are fleshed out in a world where claustrophobia and a constant chill from living on a frozen, hostile world dependent on airlocks and environmental suits for survival, are routine. For science fiction lovers, the new world of the future is masterfully crafted, and the reader is there, in Tanner’s shoes half a solar system away. For mystery lovers, there are plot twists, lies, misdirection to wade through, and secrets to be revealed in pursuit of the truth. So many secrets. For thriller lovers, the clock is ticking. Tanner has four days to unravel the truth hidden in The Freezer to solve the crime and save his own life. Just when you think you have everything figured out, Johnston piles on more, and more, and more.” — Chanticleer Book Reviews

RAMBLINGS FROM THIS CHICK:  “If Agatha Christie, Michael Crichton, Isaac Asimov, and Alfred Hitchcock had a (literary) love child, it’d likely take the form of Timothy S. Johnston’s second book in The Tanner Sequence series,THE FREEZER. A masterful combination of horror, sci-fi technothriller, and locked-room mystery, Mr. Johnston’s sophomore novel delivers a tautly paced thriller with Hitchcockian pitch-perfect tension and suspense that surpasses his excellent debut, THE FURNACE, and will have you staying up all night to finish it … The successful locked-room mystery requires that the tension be kept high and the characters (and reader) feeling claustrophobic throughout to stretch everyone’s psyche to the breaking point, and Mr. Johnston does it masterfully from the opening pages … the gruesome murders—it all combines to ratchet up tension with every passing page in a way that does Hitchcock, the Master of Suspense himself, proud … I felt as if I was Tanner, racing against the clock to kind the killer and unsure of whether I would live past the next minute.  THE FREEZER is a gripping page-turner that surpasses its already-excellent predecessor and makes a fantastic addition to The Tanner Sequence series. The science is compelling, the writing is excellent, and the depth of human depravity it explores is both disturbing and realistic. It’s not for the squeamish, but fans of mysteries and technothrillers should certainly check out Mr. Johnston’s work. I look forward to Tanner’s next adventure in THE VOID, and any future books in The Tanner Sequence!” — Ramblings from this Chick

BOOKLOVER BOOK REVIEWS:  “Johnston doesn’t waste time on artistic prose, he keeps his foot on the accelerator pedal in The Freezer, with the action almost non-stop … Johnston’s straight forward storytelling ensures this novel remains accessible to a broad audience … Johnston’s penchant for killing off characters with little warning keeps readers on their toes. Almost anything can happen, and often does … Lots of blood is spilled on this ice moon … The Freezer plot-line was great escapist entertainment. I look forward to the questions surrounding the CCF’s societal control introduced in this title being further developed in the next novel, The Void scheduled for release by Carina Press in early 2015.” — Booklover Book Reviews

KOEUR’S BOOK REVIEWS:  “This was a solid, entertaining read. There are multiple characters of interest but not too many that it bogs the story-line down. This is the future where nanobots extend life and repair damage. They are also used to kill in various ways by the dreaded CCF that controls just about everything. Kyle is a CCF investigator who gets manipulated into a plot by the dissidents that are working against the CCF … The action was really good and fairly believable. I liked the nanobot tech and the alien Europa environment. I hope that this series continues so that Kyle may expound and involve himself more in the dissidents struggle against the CCF.” — Koeur’s Book Reviews

THE QWILLERY:  “Johnston is a master of setting in The Freezer. You quickly get lost on the frozen moon of Jupiter. The environment acts as another character in the story as it changes and evolves with the mystery. Johnston is wonderful at not just using the setting as a backdrop for his stories but also immersing the characters in it and making them struggle to survive it. This is where most of the action and thrills came in the book and some of my favorite scenes were encased in the setting … The Freezer delivers what it promises as the thrills and mysteries ramp up and don’t stop until the end, leaving you to catch your breath until the next book in the series arrives … I’d also recommend it to anyone looking for a quick escape in a hard environment. It’s also good for those of you who like a challenging mystery to solve and conspiracy-junkies to speculate on what’s in store for Tanner.” — The Qwillery

BIBLIOPHILIC BOOK BLOG:  “THE FREEZER blends true science, science fiction, and a thrilling mystery. Tanner has a huge personal stake in solving this mystery and he is quite unsure of whom he can trust, beside himself. Readers will see deeper into Tanner’s psyche as his emotions play heavily into his judgment during the investigation. The science, which obviously plays a vital part in the story, is presented to readers in such as way to make it understandable and enhances the plot. Tanner himself is a complex character and his orders put him in a delicate position between his duty and the truth. THE FREEZER is an exceptional story of murder, intrigue, and cutting–edge science.” — Bibliophilic Book Blog

MARTHA’S BOOKSHELF:  “This is another sharp, intense mystery with heart-pounding suspense … non-stop, heart-pounding action … Author Johnston uses finely crafted, unique twists and details to create the mystery and intertwine the characters. There is continual danger and suspense with surprises just as the reader thinks the situation is under control. The story is told in first person by Tanner sharing an interesting view of calm precision and dedication in his job mixed with rare glimpses of emotional turmoil. The wonderful deduction process is summed up showing how Tanner pieces the facts together. My final reaction at completion was somewhere between “whew” and “wow”! I definitely look forward to the next Tanner ‘roller coaster’ mystery!” — Martha’s Bookshelf

EDI’S BOOK LIGHTHOUSE:  “As good and as spectacular as the first book in THE TANNER SEQUENCE.  It starts with a bang and then you need a lot of hot tea to escape tha cold. This is more than a simple scifi crime.  A rollercoaster ride packed with action and emotion.” — Edi’s Book Lighthouse

DEFLIPSIDE:  “If you enjoyed The Furnace, then you’ll enjoy The Freezer, as Johnston serves up another Sci-Fi mystery thriller with a strong action core. It’s a fast-paced adventure that careens across a deadly and exotic backdrop.” — DeFlipside

THE BOUNCING TIGGER:  “A real page turner this one. Just as you think nothing more can go wrong, it does! … Some of the science potential applications were our worst nightmares realised and very much enhanced the storyline of murder, police, and how to solve crimes under unusual and extreme conditions. The ending was a surprise and, of course, justified the book title in a different way but was a worrying possibility.” — The Bouncing Tigger

The Furnace, The Freezer and The Void from Timothy S. Johnston and Carina Press are available wherever eBooks are sold.  Each book in Tanner’s journey — The Tanner Sequence — is a standalone novel.