Reviews of Timothy S. Johnston’s The War Beneath 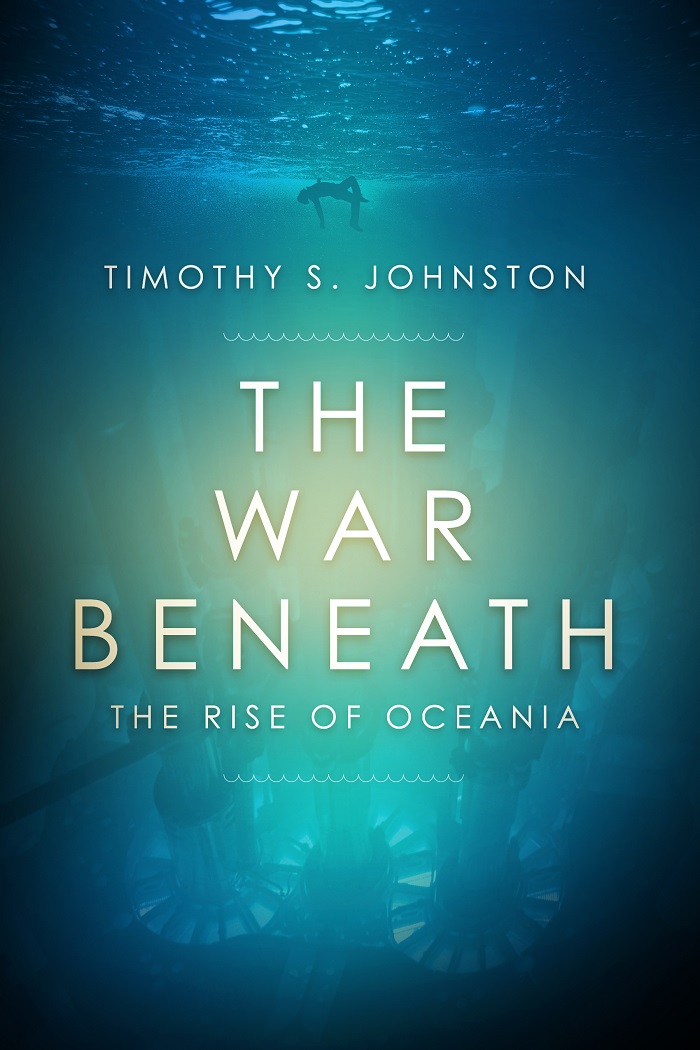 AMAZING STORIES:  “And now we come to the third ghost flitting about the pages, Ian Fleming. A number of James Bond novels and films involve underwater lairs, submarines, and fisticuffs, along with improbable plots that are fast-paced and entertaining. The War Beneath fits well into that mould. I frankly lost count of the number of times Truman has to beat the crap out of one or more opponents, sometimes inside a dry habitat, more often in the dark of deep waters. And the explosions! Plenty of explosions. All kinds of explosions. Eminently filmable. The book could easily be turned into a watchable and exciting action-adventure film. Of that I have no doubt. It’s got everything: international tensions, war-mongering, spy vs. spy, little submarines, big submarines, humongous submarines, risky diving, risky bars, risky bureaucrats, risky friends, friendly enemies, unexpected developments, annoying interlopers from France, super powers on a rampage, unsubtle diplomacy, some hot sex (just a little), and lots and lots of underwater fisticuffs. Oh, and explosions. Don’t forget the explosions.

… If you’re looking for a techno-thriller combining Ian Fleming, Tom Clancy and John Le Carré, The War Beneath will satisfy.

… all the main characters, and quite a few minor ones, are motivated primarily by revenge. This makes for rather tentative, not to say dicey, relationships. Nothing is what it seems. Nobody is what they seem. The plot involves a series of unexpected revelations which help maintain the rapid pace. It’s a good technique.

… This isn’t one of those novels where the characters spend most of their time worrying what the other characters think of them. Mostly they wonder if they will live long enough to carry out their mission, achieve their personal goals, and, above all, carry out their revenge. Nevertheless their actions are fully explicable in terms of their motivation and character warped by painful experience. A realistic touch, that. Or, to put it another way, the characters don’t stand in the way of the plot, they add to it.

… I really enjoyed reading this book. It’s what I call a ripping good yarn, a genuine page-turner. If you like action spy thrillers with lots of high tech in a science fiction setting this book will definitely please. It’s loads of fun. And fast-paced. Did I mention fast-paced? ‘Cause it is.” — Amazing Stories (Review by R. Graeme Cameron)

READERS’ FAVORITE:  “When global warming gives reality to the currently existing concerns about rising sea levels, humankind begins adapting by building cities beneath the sea. Vastly superior submarines of various sizes and capabilities are the common mode of transport. But if there’s one thing that never changes, it’s the competition between nations to be the best and the fastest in every field. To do that, each major country has its spies everywhere … sit back, start reading and enjoy a deep sea dive into the future … One very riveting, intelligent read!” — FIVE STARS at Readers’ Favorite

SF CROWSNEST: “‘The War Beneath’ is a thrill ride from beginning to end, with several heart-stopping scenes that clearly illustrate the boundaries of underwater living and warfare … Sometimes I couldn’t turn the pages fast enough as I waited for Mac and his team to figure out how to live through their next quandary.

The environment is well-described to the point where I nearly had to hold my breath for the entire book, something I find myself doing in underwater scenes in movies. The politics are sharp and twisty. What I really enjoyed about the story, though, was the evolution of Mac, himself. The plot challenges his past, present and future and he has to decide not only who he is, but who he wants to be. He has to balance his wish for a safe future for his city against the future of all the underwater cities and he has the legacy of his father and his relationship with his sister to consider as well.

All in all, I really enjoyed ‘The War Beneath.’ This novel is everything I’ve come to expect from Timothy S. Johnston and a promising start to a new series and one I look forward to following.” — SF Crowsnest

A THRILL A WEEK: “The series begins in the underwater world of Trieste City located off the coast of Florida … Johnston’s The War Beneath follows in the tradition of Tom Clancy and Larry Bond, except that all of the war machines are futuristic. If you like novels like The Hunt for Red October and Red Storm Rising, you will certainly enjoy The War Beneath. Lots of action, neat technology, and interesting characters pretty much sums it up.” — A Thrill A Week

THE CAMBRIDGE GEEK: “This is very much in thriller territory, slightly out of my usual, but not bad for all that. It feels similar to something Lee Child might write, but also has hints of Andy Weir’s Artemis … That book’s combination of science and fiction is well presented here, with a nice level of technical detail put into the difficulties of surviving at pressure … While McClusky falls rather strongly into the “action hero” mould, there’s some tweaks to his personality that allow a more thoughtful approach to some of the problems he faces. Good to see. At the same time however, if you’re here for thrills, the book will deliver.” — The Cambridge Geek

JONATHAN P. BRAZEE:  Timothy S. Johnston has done it again. A master of taut, well-crafted stories, he raises the bar with The War Beneath. In a world of rising ocean levels, mankind has taken to creating underwater cities. Human nature does not change, however, and nations compete for supremacy under the waves. I have spent time aboard US submarines, and Johnston accurately recreates the feel of living under pressure, but with futuristic technology and robust characters in this attention-grabbing thriller. Johnston has his own voice, but if you like Clancy and le Carré with a hint of Forsyth thrown in, you’ll love The War Beneath. — Colonel Jonathan P. Brazee, USMC (RET), 2017 Nebula Award & 2018 Dragon Award Finalist

ARDATH MAYHAR:  “This is a tense, gripping science fiction/thriller of which Tom Clancy might well be proud . . . I fully intended to read this novel slowly, being easily wearied these days, but once I started it I found it impossible to stop. So I read the entire 100,000+ word book in one day and was sorry when it ended. When I say it is gripping, that is the simple truth.” — Ardath Mayhar

THE MINERVA READER:  “I was immediately drawn in by the cover, with artwork by Erik Mohr (Made by Emblem) and the cover design by Jared Shapiro. Beautiful work! And I loved the story – such a great concept of cities under the seas and the writing was so cinematic that I felt like I was there, in the seacar. It felt a little hard to breathe at times, which was the writer’s intention and it was very well done! Fast-paced, good old-fashioned Cold War espionage set underwater in 2099, this book offers a great escape! Shortlisted for the 2018 Global Thriller Award and Semi-Finalist for the 2018 CLUE Award.” — The Minerva Reader

THE FUTURE FIRE:  “Johnston creates an engaging world that is highly believable. The actions takes place underwater, starting in the undersea city of Trieste and continuing with McClusky’s adventures … Johnston builds a sense of authenticity by weaving in details that anchor the story in reality, or what seems like it. The novel is prefaced by a time line that includes references to the impact of rising water levels, leading humanity to expand its frontiers to the ocean … While the establishment of bases on the moon or even Mars seem achievable in the relatively near future, Johnston’s novel makes a strong case for the notion that the oceans might realistically be the next frontier for human civilization. But Johnston goes beyond simply providing us with an image of how such cities might work on a practical scale — he also envisions the political implications. In The War Beneath, the parent countries watch jealously over their colony cities, exacting control and skimming off resources … Many science fiction writers look to the stars for their settings, but Johnston has chosen to turn his focus closer to home, providing us with an intriguing look at the potential and the politics of colonizing the ocean floor. While The War Beneath is a satisfying read with action that draws the reader into the story, perhaps equally of interest are the questions it leaves us with.” — The Future Fire

THE WAR BENEATH from Timothy S. Johnston  is out in paperback and eBook format on 18 December 2018.  Click here for purchase links.