The result was a gut-punch of a game that left me reeling.

At first I didn’t quite know what type of game I was playing. It looks like a graphic novel. There is limited animation and the player isn’t exactly free to roam quickly through zombie-infested levels. There are minimal places on each frame you can visit, scant items to look at or pick up, and multiple lines of dialogue for each character that you have to click through in order to advance the story. I’m not especially a fan of Role Playing Games, as I’ve mentioned on the blog before, so my patience began to wear thin fairly quickly. There are items you have to discover and click so you can use later. At first, while on a farm and meeting a variety of characters who would accompany me on later missions, I found my interest waning. 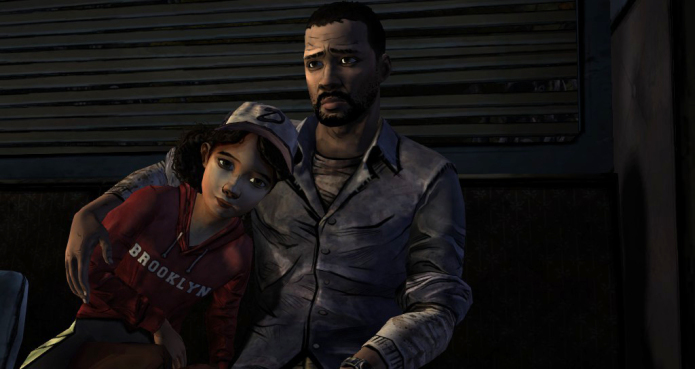 But then, only an hour in, something odd happened.

The story grabbed me and didn’t let go.

And it forced me to play through the entire season (five episodes, each lasting about three hours) in only a few evenings.

The cast of Season One 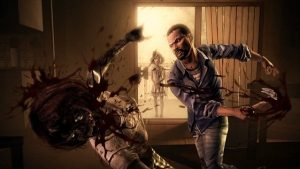 The great thing about the TV show is that it’s not about the zombies. The term “walking dead,” to me anyway, doesn’t even refer to them. It’s referring to the humans trying to survive in an apocalyptic, dystopian world. Main characters frequently die. For the survivors, it’s about connecting with other humans, forging relationships, and banding together to defeat evil. Whenever the characters are apart, you want them back together. Whenever they’re together, events conspire to tear them apart. The TV show is brilliant. The one word I would use to describe it is this: Family. It’s about grabbing a hold of something familiar and safe in the world, and doing everything you can to keep from succumbing to the agony and heartache horror of what’s become of society. To keep drawing breath, and to keep your loved ones close.

The interactive game captured the mood of the show, along with the central themes of family, compassion, and love, and combined with gruesome imagery and graphic dialogue, created a zombie story with strong characters — both likeable and not — and sucked me into a world where I found myself fighting for my life.

It felt, to my absolute astonishment, like I was inside the TV show and living the experience. 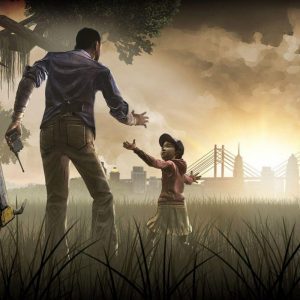 The gameplay revolves around picking up objects and using them to solve dilemmas. There are a few cases where you have to click targets rapidly in order to punch or kick an aggressor (difficult when you are used to inverting the Y-Axis — this game won’t let you adjust this!), but the more common experience in the game is the dilemma of facing two or more bad choices and having to decide quickly. Any issues or questions I had with the animation died quickly. Any problems I had with the gameplay disappeared. I found myself desperate to find out what would happen next. Other characters in the game make note of things you say that either support their viewpoint or reject it. This is remarkably immersive, because there are constant decisions to make in both story choice and dialogue, and frequent backlash directed at you by the NPCs.

This is a remarkable achievement in video game development, and it is a lesson that you don’t need hundreds of developers, millions of dollars, and years of development to create an excellent video game.

You just need a good story. 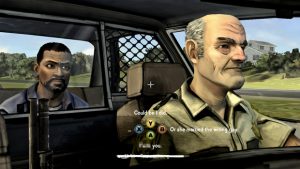 The protagonist is Lee Everett, a man convicted of murdering his wife’s lover. The story picks up right after the court case, and you find yourself in the back of a police cruiser on the highway to prison. In the background are other cruisers racing in the opposite direction. As dialogue proceeds with the driver, you notice helicopters en route to some nearby disaster. There are frantic calls for assistance on the police CB. The tension slowly builds, until all hell breaks loose. It’s the beginning of the walker epidemic. The game takes place concurrently to the show, near the city of Macon, Georgia. Soon you find yourself (as Lee) in the woods, running from walkers and stumbling into a nearby house. There you meet up with the real star of the series, Clementine (Clem). Within minutes you become her protector, for her parents are missing, and a rather solid surrogate father/daughter relationship begins growing between the two. 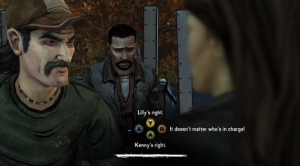 It’s a stellar story, but here’s the real kicker to this game: the choices you make determine how the game plays out. Not just in dialogue, but in future gameplay as well. The really interesting element here is that at the conclusion of each episode, the game provides you with statistics on the decisions you’ve made. It shows you how your choices compare with the thousands of other people who have already played the game.

Did other people save the same character? Or did they let them die?

Did others cut off that man’s arm to save him? Or did they let him turn? 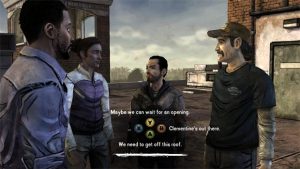 How many decided to kill a character to put him out of his misery?

And so on. It was interesting to see where my decisions lined up with the majority of other players … or in some cases, how choices I made were so different from others.

THE WALKING DEAD by Telltale Games, Season One, is an emotional roller coaster, fully interactive, which captures the mood, setting, and feel of the TV show with perfect attention to detail. The gore, language, situations, and tragic consequences of actions are compelling. One brutally tough dilemma after another confronts the player, and there is no ignoring them and hoping they’ll go away. Like the dead, they just keep coming, and the decisions you make will change the outcome of the game. It’s enough to make me want to play the entire season again, just to experience a different outcome. There are four seasons in total. A special shout out goes to voice actress Melissa Hutchison, who brought a sense of childlike vulnerability and true intensity to Clem. Her acting work here is nothing short of brilliant.

I highly recommend THE WALKING DEAD: SEASON ONE by Telltale Games. Now, on to Season Two!

Enter the contest to win TSJ Swag here.
Enter your email in the sidebar widget to follow TSJ’s Blog.

“One very riveting, intelligent read!” — Readers’ Favorite
“If you like novels like The Hunt for Red October and Red Storm Rising,
you will certainly enjoy The War Beneath.” — A Thrill A Week
“If you’re here for thrills, the book will deliver.” — The Cambridge Geek
“This is a tense, gripping science fiction/thriller of which Tom Clancy might well be proud . . .
When I say it is gripping, that is the simple truth.” — Ardath Mayhar
“… a thrill ride from beginning to end …” — SF Crowsnest
“… if you like Clancy and le Carré with a hint of Forsyth thrown in,
you’ll love The War Beneath.” — Colonel Jonathan P. Brazee (RET),
2017 Nebula Award & 2018 Dragon Award Finalist
“Fast-paced, good old-fashioned Cold War espionage … a great escape!” — The Minerva Reader

← The War Beneath by Timothy S. Johnston Now Available in Hardcover!
Upcoming Appearance in Burlington, Ontario at Indigo Brant on April 13 →