Writer Timothy S. Johnston takes a trip back in time to review EDGE OF TOMORROW on DVD and Blu 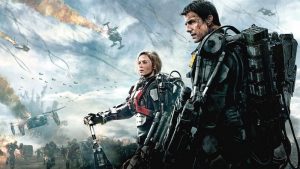 LIVE DIE REPEAT (formally just EDGE OF TOMORROW) is an intense, action-packed and engaging film that plunges the viewer expertly in a seemingly impossible battle to defeat an alien invasion of Earth. It utilizes a recurring scenario in which unwilling soldier Major William Cage (Cruise) repeatedly dies and relives the same day during an attempt to gain a beachhead in Europe. The parallels to D-Day are obvious (just check out the theatrical release date) and the action sequences orchestrated by Doug Liman (THE BOURNE IDENTITY, MR. AND MRS. SMITH) are top-notch. The f/x are seamless and nearly everything about this film is just pure, unadulterated fun. The term “Popcorn Movie” comes to mind. In fact, for me it was one of the most entertaining movies of 2014. 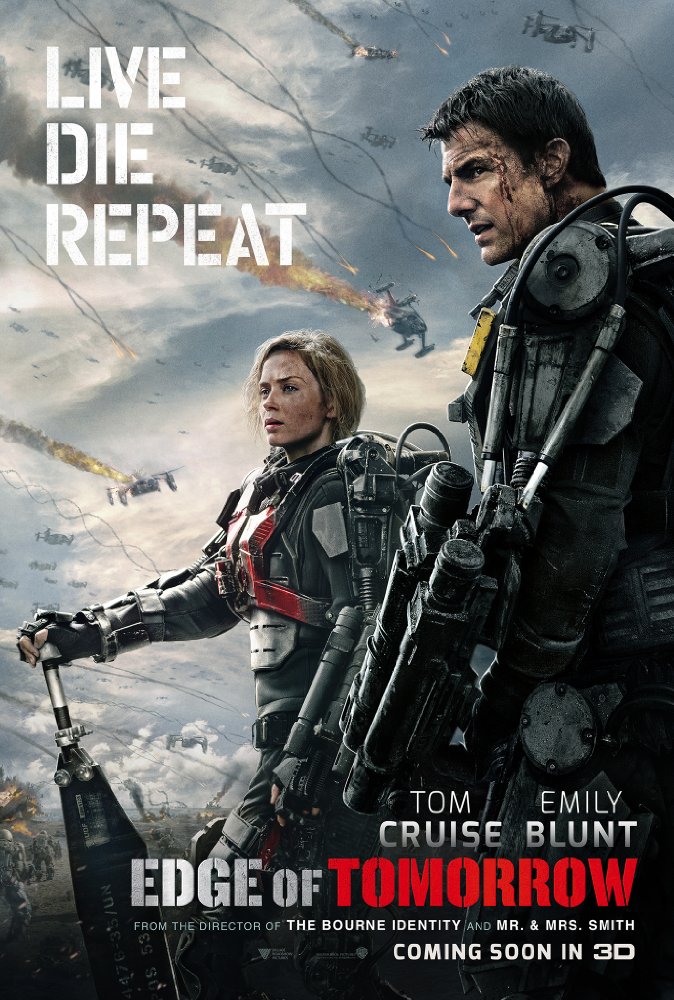 The attempt by Warner Bros. to now rename and rebrand the film could be the biggest reason. The title EDGE OF TOMORROW is generic, innocuous, and just plain boring. (Can you find it on the DVD cover at right?) Based on the Japanese graphic novel ALL YOU NEED IS KILL, perhaps the original title would have been a better choice. LIVE DIE REPEAT is more engaging and effectively appeals to its target audience, but the lack of direction by studio execs is clear. They didn’t seem to understand how best to market it. This, added to the genre effort by Cruise only one year earlier — OBLIVION — may have turned audiences off slightly. All this being said, however, EDGE OF TOMORROW is hugely entertaining.

Cruise plays a major in the allied forces working in the propaganda and recruiting division. Pressed into battle on the most important day for Earth forces, he isn’t exactly a willing participant. In fact, he does everything he can to avoid it. He’s a coward. This is unlike Cruise, and playing against type is actually a positive here.

Soon we’re introduced to Bill Paxton (ALIENS, TITANIC, TWISTER) and it’s a stroke of genius by the casting director. Who doesn’t love this guy, especially in a genre film? As Master Sergeant Farell, it’s his job to get Cage into the drop ship … even if he has to restrain and send him into battle in an exo-suit he’s never used. It all sets Cage up for a disastrous day on the beach — his fear leading up to it is palpable — and a spectacular (first) death.

But it doesn’t end there, and this is perhaps where the full thrill of the movie kicks in.

We get to see Cage die. Again, and again. 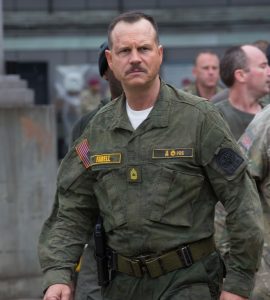 The mechanism behind this is explained, and it does make sense within the context of the film and the alien invasion. I won’t ruin it here. But watching Cruise’s character die over and over, in some of the most horrible ways possible, is beyond entertaining. Audiences are bound to laugh out loud after a while, and the humor combined with graphic violence is a sudden and wrenching contradiction that makes it even better. In fact, while watching the movie in theaters, I realized that director Liman had effectively created a mood similar to DIE HARD. Yes, it’s violent, and yes there’s a ton of death, but combined with it all is this pervasive sense of joy that Cruise himself seemed to understand and embrace. Regardless of what his critics say, he’s a good comedic actor.

Kudos to Emily Blunt as well, who plays one of the more impressive female kick-ass heroes in recent years. Her Rita Vrataski is as vicious a soldier as they come, and her role in the plot is pivotal to Cage’s success or failure against the alien threat. Blunt plays the character as coldly calculating, which is another nice contrast to Cage — an inexperienced and cowardly neophyte. 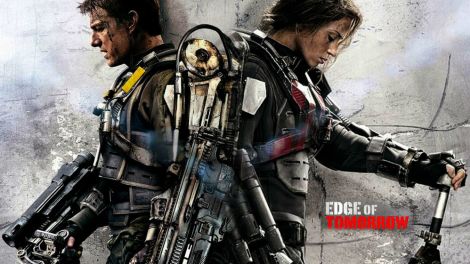 Cage reawakens after his first death amidst the troops’ preparations for the invasion, and we get to experience his initial confusion at his predicament, followed soon by stunned realization of what’s happening. And watching him anticipate his comrades’ actions as each cycle passes, and as he trains and learns to fight the aliens and survive the initial beach landing, the filmmakers set up a larger mission and goal for Cage and Company. Combined with the humor of the repeating deaths and as viewers become more and more familiar with everything the characters say and do, as well as the geography of the beach, it becomes an enjoyable experiential journey. Liman expertly crafted the pacing and action, and there is a real sense of dread for the human race.

The aliens are menacing and seem to wipe through masses of humanity with little thought or effort, and although their motives are not well understood, they are played as more of a force of nature than as a reasoning villain with a strong backstory. Think INDEPENDENCE DAY on this one. Just accept that they’re here … the real point of the movie is if and how humanity can beat them.

The movie should also appeal to video gamers, who understand all too well the frustration of dying repeatedly while learning to defeat a Boss. It’s too bad this film didn’t do better at the box office. After all, it was a critical hit and in fact one of the best reviewed movies of the year. The low receipts are still somewhat perplexing, despite a slightly flawed ending that had me scratching my head — and yet I do understand why the filmmakers finished it in such a way. It’s a dilemma for anyone involved in this industry: people will criticize a “Hollywood Ending” for being too predictable. Avoid this and face criticism for a disappointing finale. The other option is to add a twist at the climax, but this is now so common as to be predictable in itself. It’s a tough call for filmmakers nowadays.

LIVE DIE REPEAT: EDGE OF TOMORROW, despite the marketing issues, the title change, and the quirky plot setup that features a repeating death scenario, is entertaining, action-packed and laugh-out-loud funny. With a sequel now on the way, genre fans should try to catch this one as soon as they can.