TSJ Reviews the Videogame THE EVIL WITHIN

TSJ Reviews the Videogame THE EVIL WITHIN

I’ve been working on this one for a while now, following the fantastic ALIEN: ISOLATION (see review here) that I finished in December 2017. THE EVIL WITHIN is effective in terms of setting, mood and mystery. In fact, it might be the goriest game I’ve played. 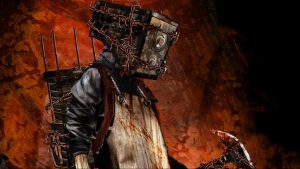 The amount of blood and horror is extreme, and there are all manners of death awaiting the protagonist (Sebastian Castellanos) featured within, including everything from blunt force trauma to being crushed by mutated monsters. Players can also expect being eaten alive and bloody expiration by a variety of spikes and traps.

The story is difficult to follow, as it involves numerous set changes and hallucinations — which players sometimes experience mid-action — but the developers reveal the sinister machinations toward the end. The slow reveal rate did cause confusion at times. I also found that the game reload rate when facing bosses was staggeringly slow — I had to sit through cutscenes again and again while trying to figure out how best to move forward in the story. I also found aiming the bolt weapon difficult — it frequently obscured the target, so it came down to guessing at the correct trajectory! 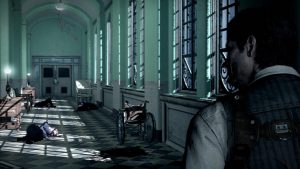 All this aside, however, I started THE EVIL WITHIN because it seemed moody and full of horror. I also purchased it because I knew a sequel was coming (already out now) and I intend to play that one too. The visuals and imagery are at times stunning. Video games have sure come a looong way — and this one is already four years old! (I’m behind the times, I know. Life is busy.) 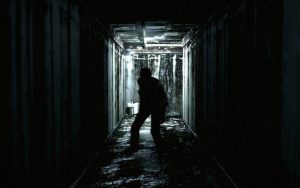 In THE EVIL WITHIN, the developers clearly wanted a horror-filled mystery, and they absolutely delivered. The amount of gore and blood is monstrous and the initial setting in an insane asylum is a satisfying trope about which few would complain. The game is third-person perspective, and there is a variety of gameplay within — everything from searching through corridors/rooms to operating stationary machine guns to navigating mazes full of bear traps to driving a bus through hordes of mutated creatures. The final cutscene sequences were amazing to watch — they were the stuff of nightmares. Kudos to the imaginations of the developers/programmers/artists involved in the game.

I’ll be investing in the sequel soon, but next up for me is FALLOUT 4.