STAR TREK INTO DARKNESS — A Review by Timothy S. Johnston 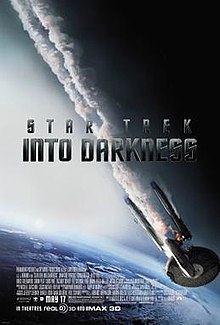 If you enjoyed Kirk and Company’s previous outing — also produced, written, and realized by the team of Abrams, Orci and Kurtzman — then there’s a high probability that you’ll enjoy this one too. It has all the elements featured in the first, including dazzling effects, exciting action and drama, some comedic relief, excellent casting, realistic sets and costumes, and a superb score. However, that being said, if you weren’t a fan of the first, then … well, you better just stop reading now, because yes, there are lens flares.

It’s a fun and action-packed film, full of exciting scenes and it’s a turbulent ride for the crew, but that’s not to say that the movie is flawless. It has a few minor problems, which I’ll discuss below, but in the end it’s an entertaining romp and it’s likely to be an early summer blockbuster for Paramount. And coming off of Trek movies like INSURRECTION and NEMESIS, it’s hard to understand how some movie goers can complain about the current state of Trek. Right now, to be blunt, it’s good to be a fan.

STAR TREK INTO DARKNESS begins with what’s essentially a teaser set on a distant planet inhabited by a race of proto-humanoids who know nothing of life beyond their homes. The Enterprise crew, there to stop a volcanic eruption that will surely eradicate life on the planet, participate in a rapid sequence of events that thrust Kirk (Chris Pine) into a tough position: save Spock (Zachary Quinto) and violate the Prime Directive — that incontrovertible law that no Starfleet officer dare break — or let his first officer die. Kirk of course saves Spock, but in the process loses command of his beloved ship and crew. 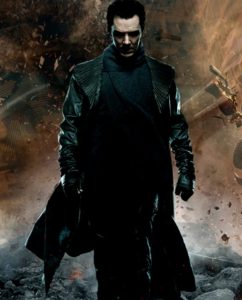 Cut to Earth — London, England — and our first glimpse of the villain, “John Harrison.” J.J. handles this introduction with a deft hand, and we meet a person on a mission motivated for reasons that writers Orci, Kurtzman and Lindelof slowly reveal. This villain, who begins his tyranny with an attack on a seemingly unimportant archive, is well motivated, as we learn later. He is not simply killing because he wants to terrorize the Federation, and it’s not a basic revenge story. He has a plan, a mission, and if people die in the process, so be it.

Benedict Cumberbatch is marvellous as the villain, and his demeanour, voice, presence, and gravitas are more than enough to fill the screen, and he’s an excellent foil for Kirk. It’s no secret now who he really is — Khan Noonien Singh — and kudos go to J.J. and the casting department for this one. Cumberbatch is one of the many bright spots in the film, and every time he’s on screen he simply commands our attention. It’s here, however, in the characterization, that the movie stumbles just a little bit. Yes, Khan explains his motivation and what he’s trying to do, providing some much needed exposition for not only himself, but also of the mysterious Admiral Marcus, but his own background is skipped over and never truly explained to the audience. We know Khan is more than human, as we see in a confrontation with some hapless Klingons, but there the explanation stops. I would have liked to know more about this man and what had happened to him and his “family” three hundred years earlier. More about his history, and why he’s so motivated to rescue his comrades from Marcus. 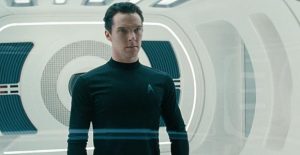 And here’s where we see an interesting dichotomy in the film. J.J. and Co. made the previous outing for mainstream audiences. They simply crafted an origin story that was thrilling and adventurous, one that anyone could enjoy. Audiences loved it — myself included — and the demographic range was huge. This movie does the same, with exciting chases and action scenes and even a lovers’ quarrel between Spock and Uhura. However, it expects us to know Khan’s back story. At the same time, it focuses more on the Trek fan than did the previous film. We see Klingons, Tribbles, and hear constant references to earlier iterations of Trek, especially The Wrath of Khan, as well as numerous quotes and quips that only a fan would catch. We also see (finally) the Dreadnought-class star ship, commanded by Admiral Marcus on his quest to militarize Starfleet and forge a war with the Klingon Empire.

So is this a good thing or a bad thing? Personally, I found many of the references somewhat distracting, serving to tear down that fourth wall — and something which occurs numerous times in the movie, such as when McCoy refers to once giving a Gorn a C-Section to deliver octuplets. The formula used in the first film worked better for me. But — and here’s the contradiction — I did want Khan’s back story fleshed out. He’s the villain here, and I want to know more about him, despite my previous knowledge of the TOS episode SPACE SEED.

The sets are great — although I would really like to one day see the impulse drive, one of the most iconic sets from TOS — the production values are superb, and the action is at times relentless. The acting is excellent, particularly by Pine, Quinto, Karl Urban, Peter Weller, and Cumberbatch. John Cho and Anton Yelchin, although good, don’t get enough screen time, which is a disappointment.

But what of the story? How does that play out?

Khan’s motivations are clear: he wants to save his seventy-two comrades, currently frozen in suspended animation, and he’ll do anything to this end. He falls under the control of Admiral Marcus, who tries to use Khan for his military genius, but of course no one can control Khan, and the super human soon begins his terrorist activities to achieve his end goals.

There were some interesting reversals in the film, which one can credit to the creative abilities of the writing team, and at the same time other items that were obvious plot turns, such as Spock’s ship-to-ship confrontation with Khan, and his solution to that dilemma.

It’s here that I felt another small sting: there is no intense confrontation between Kirk and Khan. No real space battle. No tactical match, no cat-and-mouse game. This is what I wanted, especially as rumors of Khan’s presence in the film began to circulate around the internet.

Khan, back in Trek? Yes!

But wait — no confrontation with Kirk? No space battle?

However, a few minutes after Spock’s seemingly simple ploy easily defeats the Dreadnought-class star ship, and as Spock tears off on foot following Khan in San Francisco, there’s an incredibly satisfying hand-to-hand fight between an emotionally-charged Vulcan and an engineered Human, and things once again pick up quickly. This sequence had my heart pounding, and when Spock tries that nerve pinch …

However, I desperately wanted that space battle. Kirk in the Enterprise and Khan in the Dreadnought … that could have been something spectacular, but we just don’t get it.

Although there are plot holes — easily overlooked because of the movie’s overall high quality — one scene in particular had me scratching my head. Chekov, who in the previous film beamed people up while his targets were in free fall, and who transfers people moving quickly aboard vessels in space every day, can’t bring two people up from a floating platform only a few hundred meters away. Consistency is key in a series like this, especially when there are thousands of die-hard fans scrutinizing every frame.

All this being said, the movie was engaging and gripping and a lot of fun. It’s an epic adventure, and just seeing the crew back in uniform, and on the bridge of Enterprise, is enough to start a Trek fan’s heart racing. I’m ready to see Benedict Cumberbatch again, and hope they use him in a future film. I want to see that confrontation. I want to see a major space battle. I want more Trekking in the next one. 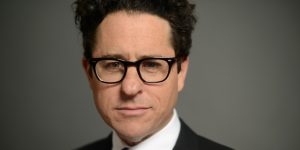 And I do want another one. Please J.J., direct another one. And speaking as a fan of Trek, I want a Trek adventure, out in deep space, that focuses on the crew and their interactions with one another and a threat to overcome. Together, as the family that we know and love.

The long and short of it all is that STAR TREK INTO DARKNESS is a highly entertaining film with a few flaws and missed opportunities, not quite as good as the previous Trek, but it’s pretty damn great in its own right. Congratulations once again to J.J. Abrams, the writers and producers, Paramount, and the whole Bad Robot team.

Timothy S. Johnston is the author of THE WAR BENEATH, coming Fall 2018 from ChiZine Publications, and THE FURNACE (2013), THE FREEZER (2014), and THE VOID (2015) published by Carina Press. Follow him on Facebook and Twitter and visit his website at www.timothysjohnston.com.