Well, maybe that’s overstating things a bit. There are action films released every year that focus minimally on the history of the protagonist and invest some time developing the lead characters. Many of these films have high-concept set pieces with some massive action sequences, but the development of characters doesn’t really exist except to manipulate the leads into arriving at that particular time and place right at the point where the viewer begins watching. Convenient, no? A character-driven action film, on the other hand, invests an equal focus on character and action.

So let’s look at some famous examples of character-driven action films from my creative formative years, and see what sets them apart from action films of today.

This is one of the greatest action movies of all time, and it will likely never leave that place in my mind. It has it all — a charismatic star, one of the greatest and most likable villains of all time, great directing, adult themes, adult language and situations, great action and humor, and a compelling story. But make no mistake, John McClane and his failing marriage with Holly Gennaro is the core of this film. Everything revolves around that. It’s the reason McClane is in Los Angeles, the reason he’s at the Christmas party, and it’s his purpose in the film — to rescue Holly and save his marriage. This movie is a perfect mix of action and character, and it really pays off. It was a brilliant effort by John McTiernan, a master of this genre. He directed PREDATOR just before and THE HUNT FOR RED OCTOBER immediately after, creating perhaps the greatest trifecta of action/adventure films by a director in filmmaking history (and perhaps a focus of a future blog …?)

If you’ve seen this, you understand what I mean. The movie features a man reeling from the death of his wife and suffering the trauma of war. He’s an alcoholic undercover cop on the verge of suicide. It’s a wonderful concept for a character. They say that in ancient Japan the Samurai were brutally difficult to defeat in combat because they thought themselves already dead. How do you hurt someone who doesn’t care if they live or die? If they don’t fear being hurt? Martin Riggs in LETHAL WEAPON is the same type of character. He’s riding the razor-thin edge of life in this film, and his relationship with Murtaugh and family pull him back from the brink. The drug dealer and psycho assassin Gary Busy are secondary to the character development in this film. This is Mel Gibson’s story, and he is brilliant in it.

I wrote about the emotional elements of THE TERMINATOR here. The relationship between Reese and Sarah is what drives this film. The stakes are huge, the action is great, the terminator itself is a lethal villain, but the character development is what counts here, and the audience is pulling for Reese and Sarah to not only defeat the T-800, but to come together in the process. Reese’s backstory is developed through flashback (or flashforward?) and his pain is palpable. Scars and burns from a life of combat cover his body. He describes women of his time as “good soldiers,” and he confesses his virginity to Sarah in the Tiki Hotel. And at the end, as Sarah dictates her thoughts into the recorder while driving her Jeep (a Renegade edition no less,) we learn what the two meant to each other, despite the short time they actually spent together. “We loved a lifetime’s worth,” she says. This is a character-driven film with fantastic Science Fiction elements and action.

Wow. This one caught me completely off guard when I saw it back in the 80’s. I was expecting an outright action film — and I got a lot of that — but the themes of PTSD and a man suffering the effects of a terrible and brutal war were elements that I don’t recall in the advertising. This movie is about the hurt and pain that Rambo is experiencing as he wanders from town to town, searching for comrades from the Vietnam war. He’s looking for peace and quiet and for something to ease his suffering through his relationships with his war buddies, but it isn’t helping his pain. And when he stumbles into Sheriff Teasle’s sphere, the sh*t hits the fan. It’s a grand hunt in a savage wilderness, a bloody quest of revenge, and Rambo makes the Sheriff pay for his cold and cruel lack of sympathy. And the cathartic scene between Rambo and his former commander Colonel Sam Trautman is haunting. Rambo breaks down in hysteric tears, and it’s an unexpected moment in an action film. It brings the movie to a whole new level, and it’s the reason it was a success, the reason it exploded at the box office, and the reason it spawned a franchise. The character elements in FIRST BLOOD are inescapable.

Graphic violence and gore, wicked humor, and amazing action pieces populate this movie. ROBOCOP is also a brutal satire and commentary on the military industrial complex. Military weaponry is infiltrating civilian lives through the politics and economics in the Detroit of the future, in this case the underfunded and therefore ineffective police force. ROBOCOP is now considered visionary in terms of what has happened with the militarization of police forces throughout North America and the privatization of security forces in conflicts overseas. But the real driving forces of this movie are the events that affect Peter Weller’s character — Alex Murphy. Murdered on the job by gangster Clarence Boddicker, the suppressed memories of this incident drive Robocop to uncover his past and reconnect with his humanity. This film is more than a character-driven action film; it is a multilayered and vicious social commentary.

This is a perfect movie. There is nothing wrong with it, not a single flaw in its entire runtime. It further develops Luke, Leia, and Han’s character backgrounds and their purpose in the story, but at its heart it’s a love story between the princess and the rogue, and a journey of discovery for Luke. In the first film, A NEW HOPE, Luke was on a mission to follow in his dad’s footsteps, fight the rebellion, and achieve the greatness that he believes his dad achieved during the war. In this movie, however, it all falls apart for him. He learns the terrible truth, which sets up a conclusion to his remarkable personal journey. Now the viewer wonders whether Luke will indeed follow in his dad’s horrible path. THE EMPIRE STRIKES BACK has amazing action pieces, a fantastic confrontation with Darth Vader, great humor and a standout performance by Harrison Ford — perhaps his best performance of all time. If you doubt that statement, check out this film again. This is Harrison’s movie, and it’s impossible not to love him in it. Ford’s performance and character is iconic, and this movie is the principal reason.

Perhaps this is lighter on the character than the others on my list, but there’s no doubt a hidden history exists between Dutch (Arnold Schwarzenegger) and Dillon (Carl Weathers) in the film, and a wealth of background is hinted at amongst the special forces team that Arnold leads, as well as other teams they’re familiar with (Jim Hopper and his Fort Bragg green berets.) The ongoing character struggle between Dutch and Dillon permeates the film, giving it a layered fabric of action, humor, and character. This is a near-perfect movie.

Incredible action, espionage and intrigue combined with a … a foundering marriage? This movie is a love story expertly disguised as a thriller. It features Harry Tasker, a US agent combatting terrorists around the world, who’s also working at hiding his professional life from his wife while his marriage is crumbling. Tasker, to save his marriage rather than tell her the truth, involves her in his current assignment, though somewhat unintentionally. Humor permeates the movie, and it’s easy to get caught up in the rekindled and growing romance between the leads. TRUE LIES is most definitely a character film and a touching romance, with kick-ass action set pieces throughout.

Maybe I’m jaded. Maybe I’m so fond of the 1980’s — I was a teen through this decade — that I remember these movies as being a source of creative inspiration and perhaps I’m looking too deep into these movies. But I don’t think so. I searched lists of action films from the 90’s and 2000’s and just don’t see the same character development in the films. Sure, there are some great movies in that era — 300, TAKEN, V FOR VENDETTA, THE MATRIX, LIVE DIE REPEAT — but the character development is secondary to the action sequences in the films. There have been some notable exceptions — JJ Abrams, for instance, took the MISSION IMPOSSIBLE series in this direction with MI: 3, where he delved into the personal life of Ethan Hunt and made his relationship with his wife the primary focus of the story. It had shades of TRUE LIES — everyone noticed at the time — but that was a good thing. His Star Trek (2009) dove into Kirk and Spock’s backgrounds (see my review here.) I recently saw WIND RIVER, a fantastic character film with glimpses of action. It is a beautiful and poignant movie with a clear message. Not quite an action film — but kudos to writer/director Taylor Sheridan for doing such a great job with Jeremy Renner’s character.

One main element I noticed while writing this blog entry is the tremendous amount of humor in many of these films. TRUE LIES, DIE HARD, THE EMPIRE STRIKES BACK, ROBOCOP and PREDATOR all contain healthy amounts to keep the audience engaged and provide an engrossing and entertaining experience.

Maybe it’s not that I’m biassed toward films of the 80’s … maybe the problem is that they just don’t make them that way anymore. If that’s the case, they should. Or, maybe the type of movie I’m looking for has just migrated to a different genre and I haven’t been paying attention. Are the MARVEL and DC films of the last two decades the new character-driven action films? Did Christopher Nolan start it all with BATMAN BEGINS? Did John Favreau take the genre into IRON MAN 1? Are the superhero origin stories the reservoir of the new character-driven action? Or, maybe they’ve migrated to Netflix and specialty channels and now exist in the ten or fifteen-hour season format. GAME OF THRONES, THE WALKING DEAD, and so on.

I just don’t know. I’ll leave it to you to ponder.

And I’ll wait around for the next PREDATOR, the next LETHAL WEAPON, the next TERMINATOR, and the next STAR WARS. They’re all on the way, and I’ll keep hoping that what once was, will be again.

Or maybe I’ll have to find other ways to recapture my youth.

Enter my contest to win a TSJ Mug here: www.timothysjohnston.com/contests (Free shipping in US and Canada!) 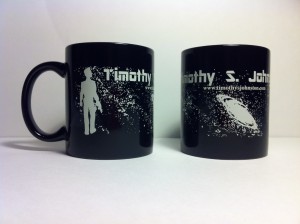 ← TSJ on THE TERMINATOR
TSJ Reviews MURDER ON THE ORIENT EXPRESS →