“Emerging” viruses exist deep in rainforests, within insect or animal hosts, and as we destroy these delicate ecosystems, we end up exposing the human race to great danger. Hemorrhagic viruses that have short incubation periods, can cause enormous blood loss, and are extremely contagious occasionally carve violently through the human population. There have been famous outbreaks of Ebola (in Zaire and Sudan, for instance), and the virus has even migrated across the ocean to the United States. There have been outbreaks of Hanta and Marburg as well. The horror in The Hot Zone is real (Stephen King called it “One of the most horrifying things I’ve read”) and I found myself riveted to the book on first reading.

It almost became a film with Jodie Foster back in 1994, before Outbreak, starring Dustin Hoffman, Rene Russo, and Cuba Gooding Jr., beat the movie to production.

Now there is a new miniseries from The National Geographic Channel starting tonight and running for three nights. I’m going to watch it. The book is scary as hell, because it foretells a real threat the human race faces, believe it or not, every single day.

The destruction of ecosystems, the ease of travel, and the very real possibility of a virus of this type making it to an airport and traveling anywhere on Earth in twelve hours is the focus of the story. We’ve seen it happen with the SARS pandemic of 2002, recent H1N1 outbreaks, Ebola in the USA in 2014, and in Reston, Virginia in 1990. And there have been catastrophic outbreaks as well, such as the Spanish Flu of 1918/19 that may have killed upward of a hundred million people across Earth.

Of course, the virus that is most commonly associated with human incursion into the rainforest (and with its destruction) emerged back in the early 1980’s:  HIV.  The Hot Zone focuses on viruses of the hemorrhagic type (they liquify the victim’s flesh and organs and the patient eventually crashes and bleeds out) or filoviruses, which might represent the greatest present danger to the human race as a species. I recommend that everyone read The Hot Zone by Richard Preston, and if you can, tune in to Part 1 of the movie tonight. I haven’t watched it yet, but I plan to, and I’ll post my thoughts here or on social media after Wednesday.

The miniseries seems to be following the book closely.  Nothing yet about Kitum Cave, but I’m guessing it’ll happen in Part 3.  The filmmakers are making use of flashbacks to detail the discovery of Ebola Zaire (1976) deep in the rainforest while events are transpiring in Washington in 1980.
Note the use of the same needle to inoculate people against Malaria at the convent … scary as hell, as is what happened to Pete Jarhling and the vial-whiffing incident.  I remember reading this section and shuddering in absolute terror.

The scene with the dead monkeys in the garbage bags and the transfer between car trunks, along with the dripping, infected blood, is pretty accurate.  The fact that this actually happened in a suburb of Washington DC is frightening.

“In a sense, the Earth is mounting an immune response against the human species. It is beginning to react to the human parasite, the flooding infection of people, the dead spots of the concrete all over the planet, the cancerous rot-outs in Europe, Japan and the United States, thick with replicating primates, the colonies enlarging and spreading and threatening to shock the biosphere with mass extinctions. Perhaps the biosphere does not ‘like’ the idea of five billion humans.”

The above quote is from Richard Preston’s THE HOT ZONE. Part of it is read word-for-word near the end of the television miniseries. Preston’s message in the book is that when there are too many people, the planet “fights back,” so to speak. There are theories that Earth is a living organism with its own immune system — The Gaia Hypothesis. Many people believe this. In times of great population density, disease, and poor sanitation, there are often outbreaks. Plague, cholera, viruses, etc. The fact that there are nearly three billion more people than when he wrote that paragraph is horrifying. He says that as we cut into delicate ecosystems, like rainforests, we can trigger a similar immune response. In this case, viruses like Ebola, HIV, Hanta, Marburg emerge into our species. Viruses that have no cure. 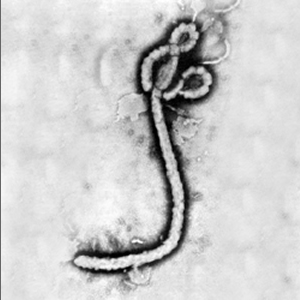 The real fear has not yet occurred: a virus with a massive death rate and a long incubation period, meaning one which spreads far and wide before anyone notices. Ebola Zaire’s death rate is so high that it burns itself out too quickly to spread too far. (It kills 9/10 people who are infected.) But should a hemorrhagic virus with a high mortality rate and a long incubation hit an airport, the human race would be in serious trouble.

THE HOT ZONE is a scary book and is one of my favorites from the 1990’s. The miniseries was well done, and the fact that these events occurred in a suburb of Washington, DC is terrifying.

Enter your email into the sidebar menu widget to follow TSJ’s blog Life After Gateway.

“One very riveting, intelligent read!” — Readers’ Favorite
“If you like novels like The Hunt for Red October and Red Storm Rising,
you will certainly enjoy The War Beneath.” — A Thrill A Week
“If you’re here for thrills, the book will deliver.” — The Cambridge Geek
“This is a tense, gripping science fiction/thriller of which Tom Clancy might well be proud . . . When I say it is gripping, that is the simple truth.” — Ardath Mayhar
“… a thrill ride from beginning to end …” — SF Crowsnest
“… if you like Clancy and le Carré with a hint of Forsyth thrown in,
you’ll love The War Beneath.” — Colonel Jonathan P. Brazee (RET),
2017 Nebula Award & 2018 Dragon Award Finalist
“Fast-paced, good old-fashioned Cold War espionage … a great escape!” — The Minerva Reader