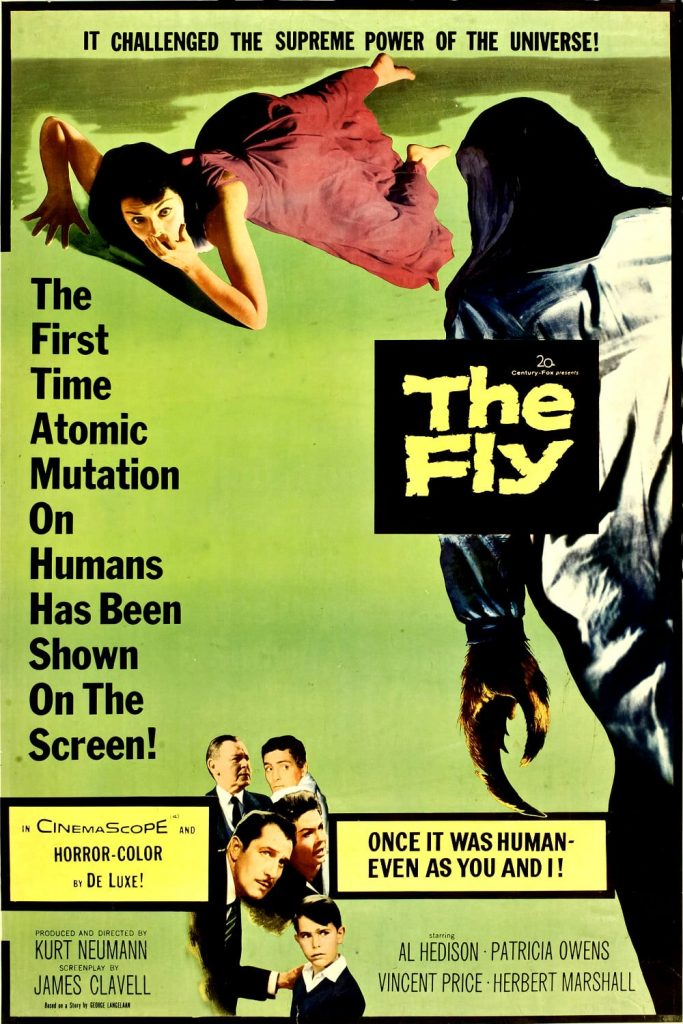 During this Coronavirus outbreak, I took the opportunity to watch the original film THE FLY with my 12 year old daughter.  We’re shuttered inside, and while I spend a great deal of my time writing, we’re also watching a lot of movies, streaming shows, and playing games.  THE FLY is a wonderful “horror” film from the 1950’s, part of my new BluRay package of FLY films, and has an important message for all content creators and creative writers.

I put horror in quotes in the above paragraph because it’s not really a scary film today.  But back then audiences didn’t really experience horror the way we do.  Today horror is a much different beast.  It includes edge-of-the-seat tension, death, murder, blood and gore, serial killers and mutants and brain-eating zombies.  Aliens and parasites and so much more.  But back in the 1950’s, horror was more about concept than anything else.  The decade revolved around the atomic industry, which people found mysterious and confusing — a technology that mostly involved explosions, radiation, and death (not energy generation) and included stories about mutant insects and monsters that killed and ate people.  Atomic irradiation generally created the monsters (see GODZILLA, 1954), or it was something arriving from outer space (THE BLOB, 1958).  The period of horror reflected technology introduced in 1945, or the exploration of outer space which began with Sputnik in 1957.  Sure, there were still stories involving the classic Universal monsters, but in the ’50’s they were mostly Abbott & Costello comedies along with three installments of CREATURE FROM THE BLACK LAGOON. In THE FLY, the concept that terrified audiences was the danger of new technology.  In this case, what would happen if humans were really trying to achieve teleportation?  And what if someone really did accidentally exchange atoms with an insect?  How would it affect a man?  His wife?  His marriage? His son?  His brother?

That’s the crux of the film, but the charm is the way its structured.  It’s a murder mystery for Vincent Price (Francois Delambre), the victim’s brother, to decipher. 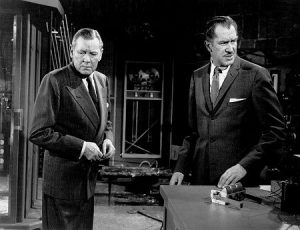 One dark evening, in the factory he owns, a steel press crushes scientist Andre Delambre.  A few curious facts compound the mystery:  First, someone activated the press twice.  Second, the man’s own wife was seen running from the scene.  She did not know how to operate the machine.  The victim’s head and left arm were squashed flat.  And third, the husband and wife were totally in love. Although he spent a great deal of time in his basement laboratory, he was a good husband and father, and his family was happy.

So why did his wife do it?  And twice, no less?

That’s the hook.  As advertised, and clearly as its later iterations proved (especially David Cronenberg’s iconic 1986 version), the film is horror.  But it’s not, really.  It’s a murder mystery, and audiences are tasked with solving the puzzle.  Why are the wife and son driven to find and capture a certain fly?  Why is its head and arm a different color?  The audience identifies with Francois (Vincent Price) in the movie.  His brother is dead, and his sister-in-law, a woman he loves, is not only the suspect, but she actually admits to killing the man.  Francois is confused (an understatement) and the audience sides with him, sees the events through his eyes, and is desperate to uncover the reasoning behind the vicious murder. 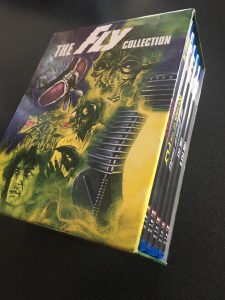 My daughter, who is a fan of mysteries and especially murder mysteries, enjoyed it.  It still stands up.  But not because of incredible effects or wonderful acting or a glorious score; rather, she enjoyed it because of its humanity.  Because despite being about a man partially transformed into an insect — a seemingly silly concept for a serious movie — it is about love, life, death, and murder.  It’s about what could possibly drive a loving wife and mother to press that button on the steel press and kill her husband.  It’s a compelling story, and there are lessons in it for every storyteller, be it novelist or screenwriter or director.  James Clavell (SHOGUN) wrote it based on the short story in Playboy.  He cleverly captured the humanity of the tale and turned it into a fable, a morality tale about the dangers of technology on modern society. 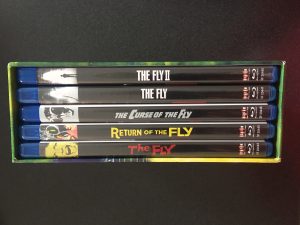 This was the reality of the world following WW2:  new technologies were cutting through society and transforming people’s lives.  Communications, transportation, medicine, industry, the nuclear age.  Technology was changing society, and everyone was reeling, including the family unit.  THE FLY is an allegory of the dangers of technology.  One family’s life is left shattered in the movie, but the warning was there for anyone in 1958 to see.  This is the brilliance at the heart of the tale, the one that James Clavell embraced and brought to the forefront.  His script remained true to the original short story, by George Langelaan, most evident in the fear of technology.  In the story, the first few paragraphs describe how the telephone bothers Andre, the narrator.  He finds it to be a new disruption in his life, one which he does not appreciate.  However, Clavell also cleverly realized that Langelaan’s story lacked a crucial human element.  Told from Andre’s point of view, he learns of his brother’s death and an incredible sequence of events which led to his demise in the “steam press,” but never seems to care.  He shows almost no emotion at any time.  Clavell brought out the humanity here, and made us care about the Delambre family. 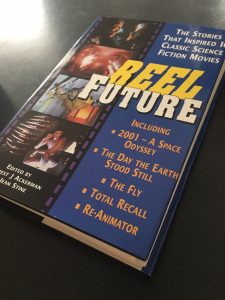 My Copy of the Original Story. (I bought it years ago to read the origin of THEY LIVE, a story titled “Eight O’Clock in the Morning” by Ray Nelson. This is a great collection.)

There are other pointed differences between the story and the movie as well.  (Story spoilers in yellow:) First, the final teleportation results in elements of the family cat — used during an early experiment — comprising parts of his fly head.  The nose, forehead, and ears, to be precise.  Second, Helene, the wife, commits suicide at the end after giving the written explanation to the inspector.  She takes cyanide.  Third, Andre, after crushing the fly in the web, has a funeral for the insect; he buries it in a matchbox next to his brother’s grave.  And last, the right arm was transformed in the short story, not the left, as in the movie. 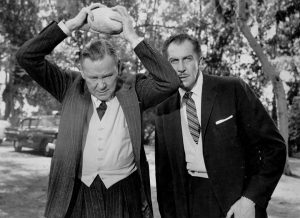 But there is one more thing that I need to mention.

THE FLY (1958) has one of the most iconic endings in horror films.  It’s the reason people still talk about it.  Those desperate last few words still resonate for anyone who’s seen it.  “Help me … heeelp me …”  Yes, granted, the effects are poor and the visuals weak.  They don’t stand up at all.  But it’s the concept that scared people in 1958, and still terrifies people today, despite the fact that the slasher genre and current horror has desensitized us to death and killing on the silver screen.  It’s the notion of Andre’s fate that affects viewers so, leaving us stunned and trembling.  It’s a tragedy, not a murder, and the scientist’s fate is terrible. 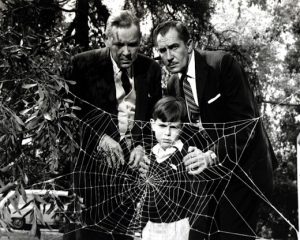 The film is brilliant, and the human element is one which storytellers should embrace.  Make the audience care.  Cronenberg, in the 1986 version, turned everything up to eleven:  the horror, the scares, the gore, the sex, the transformation … but most important, he amped up the human element.  Audiences felt sorry for Seth Brundle.  It was clearly a tragedy, and those final scenes are so incredibly emotional.

But I digress … that’s for a different review.  This one is for the 1958 version.

Now, on to RETURN OF THE FLY (1959).  I’ve never seen it, so I’m excited to dive back into this world and the Delambre family history.  I’m anxious to discover the fate of those plagued by the need for knowledge in the post-WW2 era.

And those who tempt fate by following in their father’s cursed footsteps.

Final Note:  I’m distancing from people at the moment and for the next two weeks, minimum.  I have older parents/in-laws who are immuno-compromised.  While I sit about, writing and watching movies, I am thinking about the people on the front lines, in the hospitals, dealing with this crisis around the world.  Know this:  the rest of the world is proud of your work and respects what you are doing.  You are heroes.  Take care of yourselves too.  — TSJ