New Review of THE SAVAGE DEEPS from A Thrill A Week 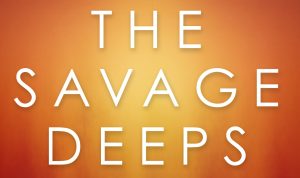 Blog A-Thrill-A-Week has reviewed The Savage Deeps and has given the book a five star review.  Here’s an excerpt:

“The Savage Deeps is like a futuristic Das Boot with a lot of intense action and some interesting technology. Even though The Savage Deeps is the second in the series, it could easily be read as a standalone. The first book of the series, The War Beneath, primarily introduces the characters and gives a glimpse into what drives Truman McClusky, definitely a worthy read, but The Savage Deeps is considerably more action packed. Since the ending was full of spine-tingling thrills, I give The Savage Deeps a five star rating.” — A-Thrill-A-Week

“The Savage Deeps is like a futuristic Das Boot with a lot of intense action and some interesting technology … full of spine-tingling thrills … I give The Savage Deeps a five star rating.” — A-Thrill-A-Week

← THE WAR BENEATH by TSJ a Semi-Finalist in the 2019 CYGNUS Awards
The Second Cold War is Coming, and the Culprit is Climate Change →