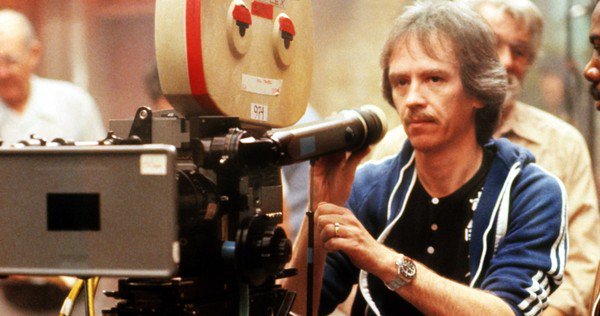 John Carpenter is my favorite director.

I think that’s pretty obvious if you’re familiar with my blog, Life After Gateway. My post “The Greatest Trifectas in Film History” made it clear that I believe him to be a visionary director whose massive appeal in the SF genre is on par with Cameron, Spielberg, and Abrams.

Moviegoers know him more as a horror director. After all, his moniker “The Horror Master” says as much, and his contributions to horror are monumental. His film Halloween (1978) was a blockbuster: made for just $300 000, it grossed nearly $70 million at the global box office. It could be the most successful horror franchise of all time. It spawned an entire genre, the “slasher” film.** His influence in the action genre is just as important (i.e Big Trouble in Little China). But what I’m most concerned with for this article is his contribution to speculative and science fiction. Let’s look at those films now. 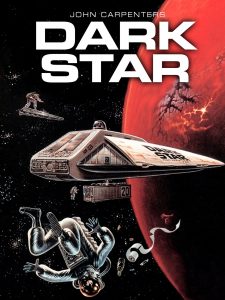 A film set in the distant future exploring the impacts of the militarization of the human race is definitely speculative fiction. They say that nations who expand their military end up going to war simply to bring their efforts to fruition. To experiment with their weapons, test their troops’ training, and put the investment (of money and technology) to use. Historians routinely cite militarization as a major cause of The Great War. John Carpenter and Dan O’Bannon examined this with the dark comedy, Darkstar. In it, an intelligent bomb desires to achieve self-realization by exploding and destroying the spaceship and crew. It’s both existential and metaphorical for the military industrial complex in the United States and Russia at the height of the Cold War. It’s an extremely low budget film (originally a student film), but it made its mark on audiences at the time, and it was enough for Carpenter to land his next directing gig. Thank God for that. 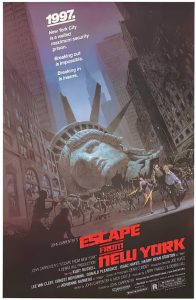 A dystopian film about a future USA ruled by an authoritarian government. Crime is rampant and the punishment severe — banishment to an abandoned and walled-off Manhattan. It was the second collaboration with Kurt Russell (many say the Carpenter/Russell partnership is as artistically successful as the Scorsese/DiCaprio, the Spielberg/Hanks, or the Burton/Depp films) and his anti-hero Snake Plissken became a cultural phenomenon. The science fiction concepts are minimal, but the speculative ones are grand.

Most horror critics place this film in their Top 5 of all time. It was a stunning achievement. The exteriors were shot on location in Alaska. It was a grueling undertaking but the result is a masterpiece. Featuring an alien running amok, it’s largely a speculative piece with some science and a lot of hypothesizing, both implied and explicit, about the alien’s intent and biology. This remake of The Thing from Another World, based on the John W. Campbell, Jr. novella Who Goes There?, is an exercise in paranoia, another partnership with Russell, and it explores the science fiction imposter theme. I’ve written about it here and here, and spoken about it here. The Thing is one of the greatest science fiction horror films of all time, often placed alongside Alien and Terminator (which I wrote about here) and it’s my second favorite movie. 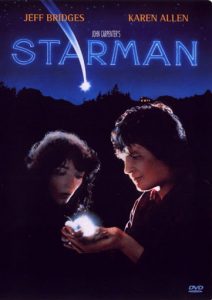 This is a romantic SF film about an alien who visits Earth and transforms into the facsimile of a man who has recently passed away. The narrative focuses on the tremendous impact this has on the widow (Karen Allen), and also on the military industrial complex in the United States and its innate fear of the unknown. This is a topic that has been explored countless times before and since (such as Zemeckis’s CONTACT), but never through such a romantically-driven narrative. It was funny and heartwarming and it earned Jeff Bridges an OSCAR nomination. 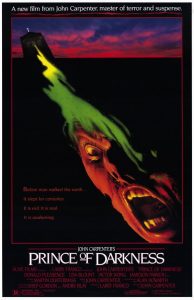 This film is mostly straight-up religious horror, but it delves into the realm of alien mythology merging with Christian scripture. It involves metaphysics and tachyons and their potential to travel through time. The characters perceive mysterious “communications” from the future as dreams, and the warning being transmitted is apocalyptic. I have to confess that this is the scariest film I’ve ever seen. I still have trouble watching it. I’m one of the few who saw it in the theater upon its release. It was a sold-out show, which pleased me, but it didn’t end up earning much money. As with most of Carpenter’s films, their popularity grows over time. If you enjoy horror and haven’t seen this, give it a shot. 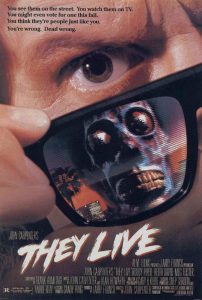 Perhaps his deepest exploration into speculative fiction, John Carpenter explores the Reagan error of “trickle down economics” while using the metaphor of aliens infiltrating American society and making the rich richer and the poor poorer. Loosely based on the short story Eight O’Clock in the Morning by Ray Nelson, Carpenter tells the tale through the eyes of a homeless and jobless drifter, Nada, who stumbles upon the invasion and realizes aliens are using the Earth for resources and her people as tools to extract wealth. The only way a human can grow rich is by selling out his or her own people. The underlying themes of capitalism at the expense of the poor is obvious. It was a marvelous concept and it resonated with genre fans at the time, and over the years the film’s impact has only grown. From the six minute fight scene (parodied on South Park) to the sunglasses that reveal the truth, the film’s themes and exploration of society using an analogy of extraterrestrial invaders is truly SF at its best. This film, despite the low budget, is a tremendous artistic achievement which stands up to this day. 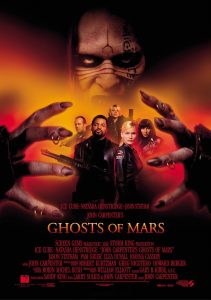 Well, what else can I say but every list has its clunker. This might be the one here. It’s a ghost story that takes place on Mars. Thematically, it’s about the dangers of resource extraction at the expense of the environment. Or, the evils of colonization at the expense of the original inhabitants. There’s not much science in this one — it’s mostly speculative fiction due to its setting. It’s an interesting diversion but not up to the level of Carpenter’s other films. I believe he meant it to be more of a light-hearted comedy, but that’s not the tone the end product delivered. However, it featured a performance by Jason Statham before many people were familiar with him, and he is always fun to watch. The film has its moments.

To millions he’s an iconic film director in multiple genres. To me he’s also a legend. He’s credited as writer on all of the above except for The Thing and Starman. The films I’ve listed don’t include his other horror entries, like The Fog, In the Mouth of Madness, The Ward, Vampires, or Christine, or his thrillers like Someone’s Watching Me or Village of the Damned. I hope he continues making movies. Most of his time now seems devoted to composing music (he recently scored the latest Halloween) and his many graphic novels. He has made a tremendous mark on speculative and science fiction, his films are both artistic and creative, and the themes are powerful. He’s also inspired a generation of filmmakers and writers, and this is something I know as a certainty. My first novel, The Furnace, also featuring the imposter theme, is in part an homage to The Thing.

*Originally posted at Aurelia Leo February 2019, but has since disappeared from the site.  Reposted here for posterity.

**Bob Clark’s Black Christmas (1974) has also been cited as a progenitor of the “slasher” genre.

“It’s an SF techno-thriller that opens with a tidal wave of action (literally!) and never lets up. Indeed, Fatal Depth is an unpretentious, hugely entertaining read set in a vividly realized and all-too-plausible future world. Mix one part Tom Clancy with one part Ian Fleming and the result might well be Timothy S. Johnston …” — Michael Libling, author of Hollywood North: A Novel in Six Reels

“Fatal Depth is a whirlpool of a novel that sucks the reader right in and doesn’t let go.” — J.J. Dupuis, Author of the Creature X Mysteries