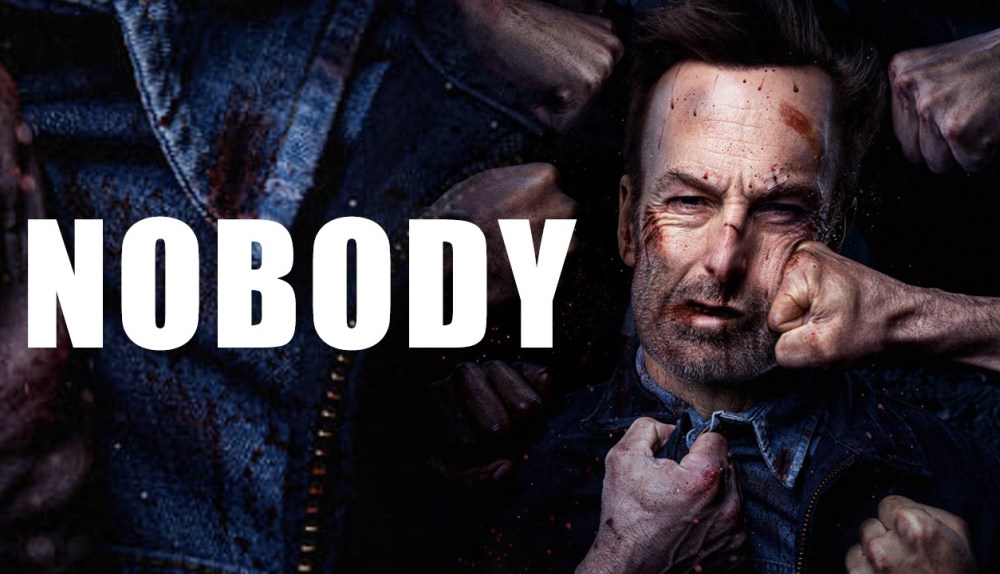 Bob Odenkirk plays former government agent Hutch Mansell. He’s married to Becca (Connie Nielson) and has a son and daughter. They live a normal, sedate life in a suburb, and Hutch is an accountant for a manufacturing firm owned by Eddie (Michael Ironside). Hutch misses the action and excitement of his former career, and his life is now downright boring. His marriage is suffering, his son doesn’t respect him, and each day drones on and on, blurring into the next.

During a home invasion, Hutch decides not to resist. He lets the burglars escape, which incurs the wrath of his son and derision from his neighbors. Hutch has his reasons, but at the time he felt it wasn’t necessary to make use of his hidden skills. The internal friction begins at this point, however, and eventually Hutch finds himself on a city bus with a crew of thugs whom he quickly dispatches. They do hurt him — Hutch is rusty at this — but it’s clear that he’s having fun again. One of them is the brother of a Russian mobster, and this is where the story really begins. 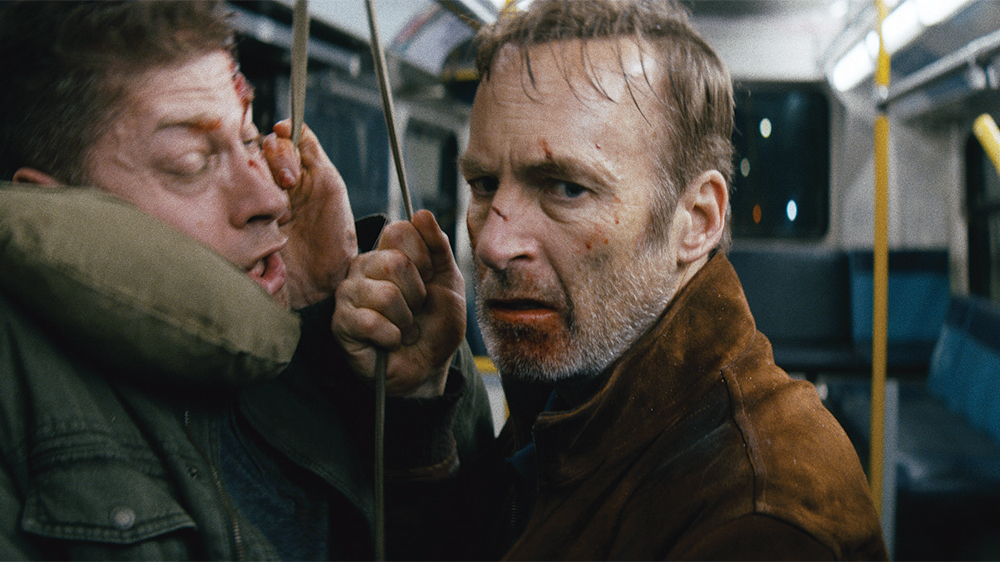 Yulian is the mobster, and he has one of the greatest movie entrances in action film villain history. It involves a nightclub, drinking, singing, dancing, and then murder. It’s a highly creative scene; kudos to the filmmakers and Aleksei Serebryakov for pulling it off. 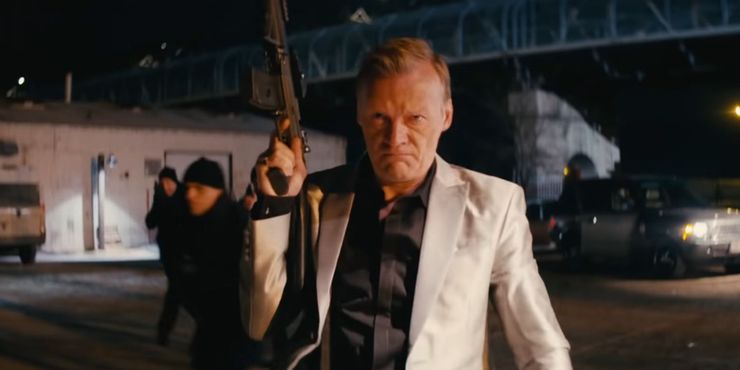 There’s not much else to tell about the story. It involves simple revenge and the rediscovery of a life once loved and now lost. Hutch rekindles his love for his past while destroying gangsters, and we learn more about his family and his government work.

This movie made me giddy from start to finish (including the stinger during the end credits). Right from the introductory scenes of Hutch’s daily routine, which director Ilya Naishuller filmed in an incredibly creative and humorous montage, we quickly get the point. There’s no extra fat in this film. It’s tight. I had a goofy grin on my face during the action sequences, and seeing Christopher Lloyd in his supporting role was joy-inducing. The action is stylish, the music a wonderful addition to each scene, and it’s just plain entertaining. Some of the camera angles made me sit up and take notice, most notably during the car-chase sequence. There is a HOME ALONE-style climax to this film which had me simultaneously laughing and groaning in empathetic pain for the suffering criminals. It’s hard to do action films without being derivative (and the Home Alone montage is obvious!), but this one nailed it. The hand-to-hand combat, the gunfights, the knife fights, and the larger weaponry and car chases … it all seemed fresh and new. This is hard to do today, but the filmmakers not only did it, they did it very, very well. Don’t believe me? Just wait for the Claymore mine. 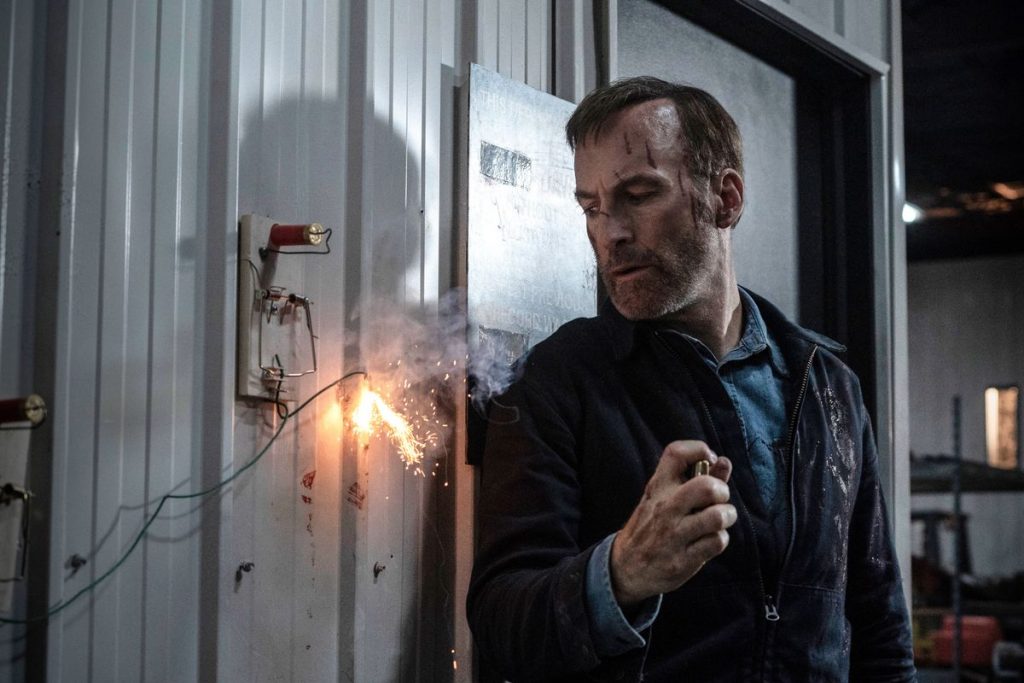 There’s something else I want to point out. An element often missing from today’s action films: humor. If you remember the 80s or 90s, you’ll know what I mean. The best action always involved humor. From Die Hard to Predator. Almost every Arnold film used loads of humor. The purpose is to take the audience on a roller coaster of emotion. Nobody succeeds at this where so many other movies don’t … or, they don’t even try. They’re way too serious. It’s why I compare Nobody to Kickass … tons of action, and at the same time, funny situations and lots of laughs. This is a roller coaster for sure.

– It is a tightly-paced film! It’s fast-moving and action packed.
– It’s full of humor. You’ll be laughing from start to finish.
– Christopher Lloyd and Bob Odenkirk.
– It’s stylish and gory.
– The soundtrack really complements the action. 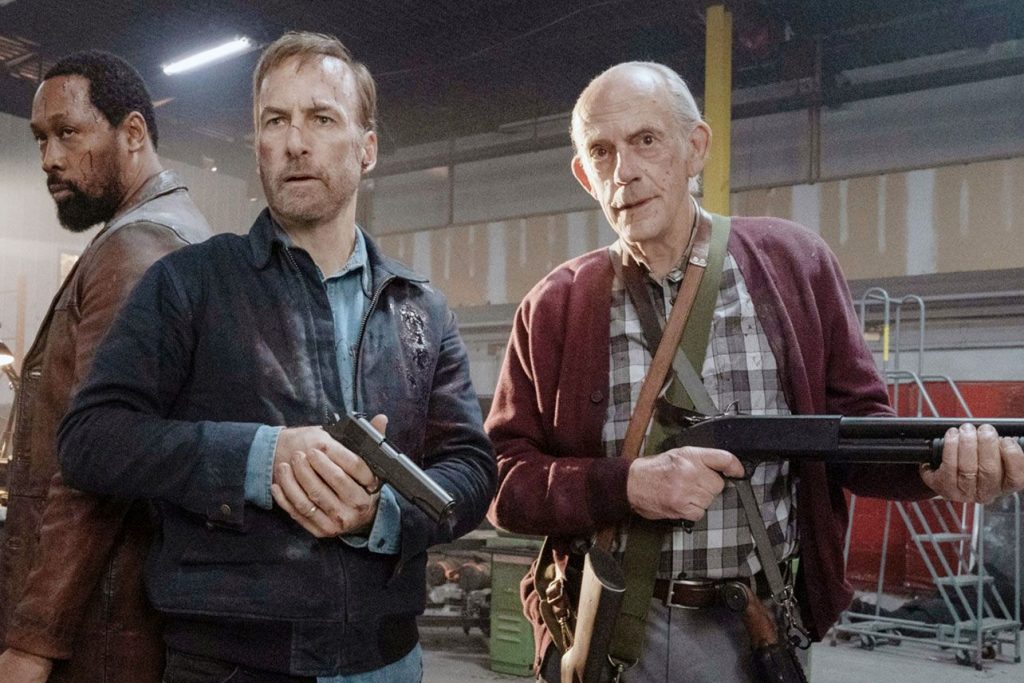 – The initial burglary doesn’t involve the Russians or Hutch’s escalating issues with the city’s underworld. It has little to do with the story, and I felt that it would have better served the narrative had it been involved in some way. I understand why it happened: to introduce Hutch and the disappointment his son feels regarding Hutch’s inaction in a stressful, violent situation. However, it felt a tad disjointed and disconnected.
– There seemed to be an unlimited supply of bad guys. They just keep coming, and it’s comical, but not in a funny way.

Overall, Nobody is stylish, funny, and action packed. I paid $24.99 for the rental and I loved it. It’s a great Friday or Saturday-night film, but it’s not for the whole family. If you liked Kickass and John Wick, you’ll enjoy this. I want more.