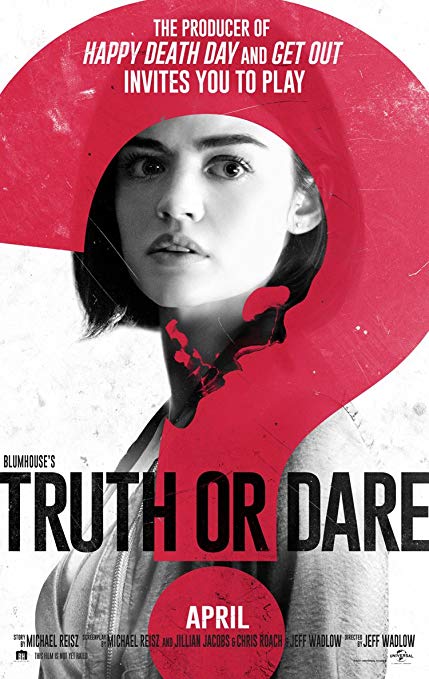 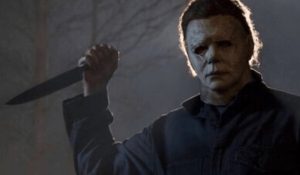 Blumhouse pictures, founded by Jason Blum in 2000 (pictured at right), didn’t just appear on the horror scene. Blum has spent nearly two decades not only quietly producing quality films, but also creating lower budget fare that enables directors to have more of a say in the creative process. At least that’s the story that Wikipedia is selling. I’m not entirely sure if it’s true or not, but it certainly sounds good. What I do know is that if Jason Blum’s name is on a movie, it’s generally pretty solid. After all, his most recent success isn’t just a modest hit — it’s an outright blockbuster titled HALLOWEEN, made on a budget of $10 000 000 and grossing eight times that in its opening weekend alone. This year they’ve also unleashed THE FIRST PURGE and INSIDIOUS: THE LAST KEY on moviegoers, along with many other titles.

But more on Blumhouse later.

Let’s get to TRUTH OR DARE. 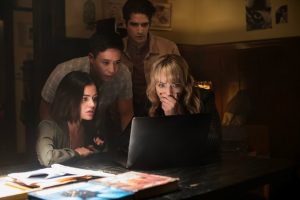 The film opens with a horrible and seemingly random murder in a convenience store, apparently the result of a game of truth or dare. The events are shrouded in mystery. A character not even playing the game gives the instructions off camera, and the woman who committed the murder didn’t even seem to be involved in a game — she was in the store to buy cigarettes. So how did this happen? Who exactly gave the dare? And whatsmore, why did the culprit even choose “dare?” Why not just say “truth” to avoid doing something criminal?

It’s an opening that I have to admit creates a chill of mystery over the entire film. Rest assured, the answers do come, but not till much later in the movie. 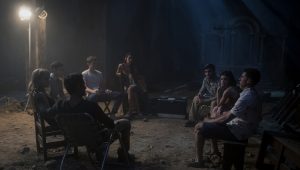 Cut to a group of college friends traveling to Mexico to celebrate their final Spring Break. What follows is a typical scenario — the beach, clubs, drinking, lots of fun with friends and hook-ups — but within a few minutes a new character arrives on the scene. His name is Carson, and he convinces the group to travel with him to a secret location to party and play a game of truth or dare. The location is an old decrepit monastery of some sort, where of course a sinister evil is hiding.

Following a short sequence where the group begins the game, they return to the States where they discover, to their absolute disbelief and horror, that the game has not stopped. They have to play or they die.

It’s here that the viewer’s disbelief begins to take hold. It seems stupid, after all. But what the hell, it’s just a movie. Eventually the filmmakers slowly reveal the backstory and the characters (and viewer) learn what’s going on. We find out why the woman at the beginning committed murder. We find out why she picked “dare” and not “truth,” and it fits within the mythology the movie establishes. So, rather than complain inwardly at the inherent illogic of it all, I just sat back and enjoyed the story.

It’s not so much that this movie is scary. It’s not at all. But once the characters figure out what’s happening to them, you can’t help but feel compelled to find out how they’re going to get out of it. There’s a demonic/supernatural element to the events, and when a character chooses “truth” you’re wondering what they’re going to say that could be so terrible. (If they lie, they die.) And when they choose “dare,” which they have to after two “truths,” you’re wondering exactly how bad it’s going to get. It’s like watching someone on the verge of doing something horrible. A part of you believes there’s no way they could actually go through with it.

The problem is, they have to do it, or they die.

And you can’t look away.

And this is the draw of TRUTH OR DARE.

It’s a diverting film and yes, it’s enjoyable. I’ll give it a 7.5/10. It’s not really horror or scary — it’s more supernatural — but it is entertaining. Kudos to the actors, the writer and the director for making the concept work. That in itself was a chore, and they pulled it off.

But let’s get back to Blumhouse Productions. The company, led by Jason Blum, specializes in lower budget horror, but that’s not all they do. They also gave us Oscar-winning WHIPLASH and the sure-to-be-nominated BLACKkKLANSMAN. They’ve produced (among many others): 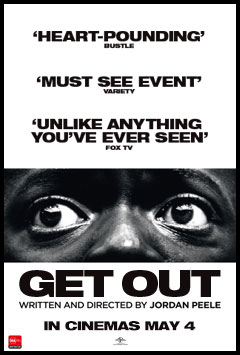 The business model they’re following is brilliant. I’m assuming that Jason Blum noticed that there is not only a distinct lack of R-Rated Horror, but there’s a thirst for it among adults who are sick of the 80 minute PG-Rated “horror” that studios have been pumping out for the past several decades. So with a lower-budget film and greater creative freedom for the directors, Blumhouse has unleashed a series of horror/supernatural films on moviegoers. They typically offer creative stories that involve a supernatural or horror element, they’re usually Rated PG-13 or Restricted, and they are compelling/engaging to watch. Blumhouse has seen some ridiculous profits since its inception in 2000. Just check out these films’ budgets against their world grosses:

Obviously there are distribution costs (if Blumhouse distributes the film, that is; Universal pictures covered TRUTH OR DARE’s). There are also massive marketing costs. HOWEVER, with a business model that leans on the obvious adult desire for horror movies, with such profitable margins seemingly built into the product, it’s clear that Blumhouse is not only doing a fantastic job at providing product to moviegoers, they’re also creating entertaining movies that people seem to enjoy, even if critics don’t. TRUTH OR DARE, for instance, currently has a 14% on Rotten Tomatoes, but its CinemaScore is B-.

I say keep them coming. Give me some R-Rated horror with characters thrown into crazy life-or-death situations. Give me good production values and well-directed movies. Give me creative ideas and good writing. If the concepts are ridiculous, it’s okay. I’ll suspend my disbelief if it’s a quality product. Am I at least entertained? If you want me to give you a Truth, I’ll say “Absolutely. I enjoyed Truth or Dare.”

“… sit back, start reading and enjoy
a deep sea dive into the future …
One very riveting, intelligent read!”
— Readers’ Favorite

Purchase links for THE WAR BENEATH by TSJ are here.