When I was a teenager, I read a lot of 1950s Science Fiction. It was the tail end of the “Golden Age of Science Fiction.” Asimov, Pohl, Heinlein, del Rey and more. I fell in love with the genre because of those books. They sparked my imagination and took me to fascinating locations in futuristic settings. The stakes were always huge. It’s those books that really taught me how important YA Science Fiction is. Readers get hooked on the genre early; it’s what happened to me.

One setting authors used frequently was the underwater environment featuring cities on the seafloor with colonists mining, harvesting kelp, and fish farming. Books included Attack from Atlantis by Lester del Rey (1953), The Undersea Trilogy by Frederik Pohl and Jack Williamson (1954-1958), and later Crisis on Conshelf Ten (1975) by Monica Hughes. 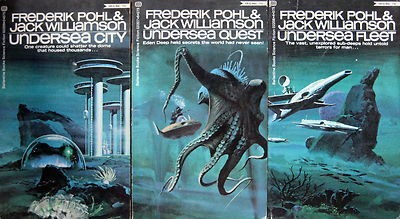 The environment resonated with me. Creaky hulls, increasing pressures, flooding cabins and corridors, and imploding submarines. Torpedoes and mines and countermeasures. Tension just exploded off the pages. I loved those books. There were a whole series of movies set in the environment as well — from The Abyss, Leviathan, Das Boot, 20 000 Leagues Under the Sea and even Deepstar Six to books like Crichton’s Sphere and Nick Cutter’s The Deep. Most films were from the 1980s and later, with the exception of Disney’s 20 000 Leagues. 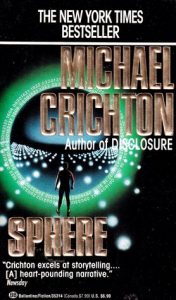 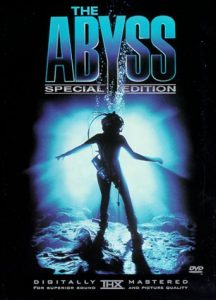 I found the environment thrilling and knew one day I’d write a book set underwater. It’s a fascinating and dangerous location, with great potential for action and drama. The issue was that I needed a reason for my characters to be out there. I wanted to have entire cities on the continental shelves, populations in the hundreds of thousands for each, and an escalating war between the superpowers of the Earth.

So the idea sat in the back of my brain for many years.

During the 1980s and 90s, I spent hours in classrooms (at the University of Western Ontario) discussing the increasing environmental hazards of the Industrial Revolution. During those decades we actually watched the impacts as they happened! The ozone hole, rising ocean levels, and changing climates terrified people at the time. (Nowadays these things are just accepted aspects of our lives — like bottled water and sunscreen.) And then, one day, the solution to my writing dilemma hit me. What if arable cropland on the surface became so desiccated due to rising temperatures that “breadbasket” regions of the Earth failed? What would happen?

And governments of the world would look to the oceans for salvation.

To the shallow continental shelves.

That was it! I had my idea, and it seemed not just exciting, but likely. 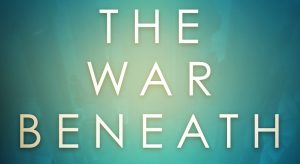 In Bookstores and Online Now; Click for Purchase Links

The Rationale for Underwater Colonization

The continental shelves are those areas ringing the continents, usually at a depth of less than 150 meters. The ocean floor drops off precipitously past this fringe — into the ocean abysses — but the shelves are shallow, relatively easy to access, sunlight can penetrate to the bottom, and they are rich in resources. At one point in the Earth’s past they were actually above the water level, and once dry land. Now the combined areas of the world’s continental shelves equals the landmass of Asia.

They equal the landmass of Asia.

Of course, all it’ll take is some event or incentive to motivate us to look to the shelves for resources. 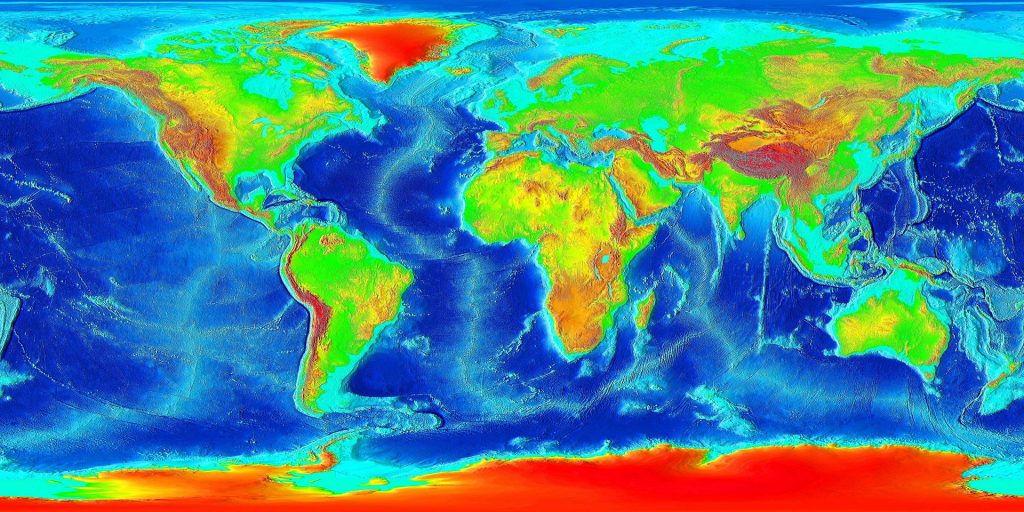 Public Domain Map of the World’s Continental Shelves (in Cyan)

So what do the shelves offer humanity?

Fish farming is a relatively easy enterprise. Nets or walls of bubbles keep the fish penned in — bubbles are as impenetrable as steel to them — and there we can grow schools of fish to later harvest. Right now the human race farms more fish than beef. Over 50% of the fish we eat is from fish farms. Some nations rely almost solely on fish farming — clams, shrimp, fish, or other aquatic species. The emerging aquaculture industry is called “The Blue Revolution,” and it is here to stay. It has its proponents as well as its detractors, but as populations soar, the need to locate new sources of food will intensify. 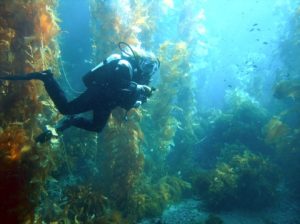 It’s not commonly eaten in our culture, but drastic times will call for dietary changes. Kelp forests are common in the oceans. A kelp plant will grow a meter a day in the right conditions! In The War Beneath, the city Trieste focuses on kelp production. It’s used as food and drink (tea and beer!) and also further processed into methane for land nations. Fertile soils eroded from the continents cover the continental shelves. Kelp grows well on this seafloor material, and it’s a natural future source of protein for human beings.

Mineral deposits litter the ocean floors. Iron, nickel, and manganese for instance, found in gravel-sized nodules, are the result of sedimentation near tectonically active regions of the oceans, and are lying on the surface of the seafloor. These are in deeper locations out in the ocean basins, but in The War Beneath, the conshelf cities are also “staging points” for mining ventures. Other minerals are found in the ocean crust, which we’d have to drill to reach, but it’s possible, especially as supplies diminish on the surface and their values increase.

Nodules are generally located deeper than 4000 meters and in some areas cover massive regions with masses of up to 75 kilograms per square meter! That’s a stunning statistic, especially when we start to run out of these minerals on the surface. As prices rise, these deposits will begin to look more attractive, spurring on competition among the world’s superpowers. 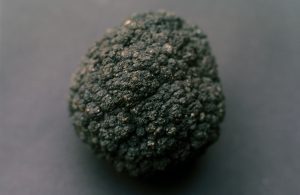 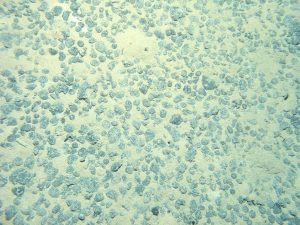 Mineral Nodules on the Ocean Floor; Photo courtesy of Abramax

This is already happening through offshore drilling and floating oil derrick platforms. Deeper deposits are out there, and we’ll actively search for these too. Unless of course the world switches from fossil fuels, but until then there will always be a drive to find new deposits to extract. 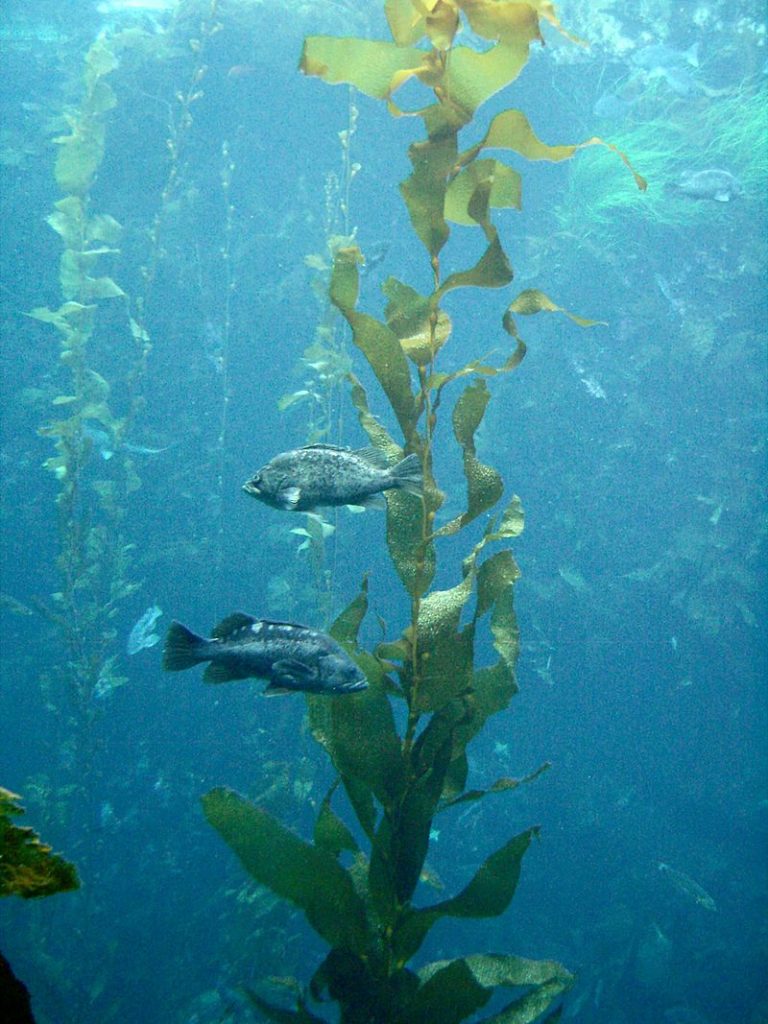 Many believe that outer space is the next hope for humanity. I disagree. That will come in time as we look to asteroids for minerals, but the next practical step is to the world’s oceans. But to fully develop the resources there, we’ll have to develop new technologies. We’ll have to learn to live there comfortably. We’ll have to go deeper and faster underwater than ever before. Live there for extended periods of time. But as the surface environment changes — which is inexorable — the oceans will offer the human race hope.

Diagram in the Public Domain

These resources and the reality of global warming and the inevitable effects are what inspired me to write The War Beneath, The Savage Deeps, Fatal Depth, and An Island of Light.  (The Shadow of War is coming this Fall.) People will one day begin moving to the shelves. They’ll have lives there. There will be marriages, newborn children, families, and death. But along with that, conflicts will spark among nations and among undersea cities as well. A new Cold War could develop as nations compete for the vast resources of the oceans and seafloors. It’s in this environment that Truman McClusky, agent of Trieste City, lives and works. It’s a world of competition, hazards, and often outright violence, and in The War Beneath, McClusky embarks on a mission to retrieve a piece of valuable technology. His city is depending on it, and should he fail, the Earth’s ocean resources could fall into the hands of hostile competitors.

The oceans are the next great frontier for humanity.

They are also the next battleground.

* Note: I recently wrote a post for Speculative Chic about “My Favorite Things” related to the oceans. That article inspired this one. As a result, the introductions are slightly similar, but the similarities end there. Find the original article here.

Here’s a radio interview I did discussing themes in The War Beneath as well as inspirations: https://timothysjohnston.com/radio-interview-with-tsj-on-writing-thrillers-managing-a-busy-life-star-wars-and-the-war-beneath/

AN ISLAND OF LIGHT is out! Watch the exciting book trailer now!